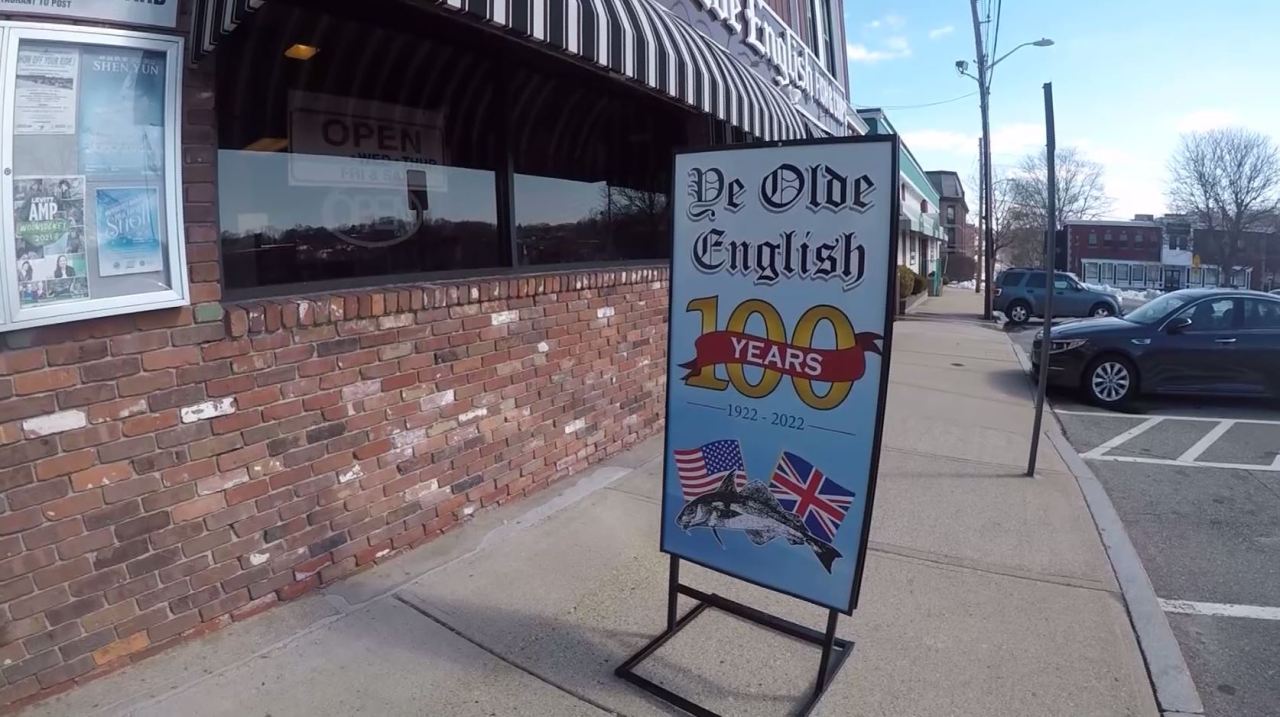 WOONSOCKET, RI (WPRI) – You don’t even have to take a full step inside Ye Olde English Fish & Chips to know how it has stood the test of time – 100 years, in fact.

At first, your stomach is awakened by the delicious aromas of fresh fish and chips and chowder. Then your eyes will feast on the many pictures hanging on the walls telling the story of Woonsocket.

If you’re lucky, you might even hear the story from owner Gordon Robinson himself. 12 News spoke to him while he was in town to meet with a publisher for a book he is writing about his memoir from the establishment.

“My mother worked until she was 95 here,” Robinson pointed out on a wall of photos of her employees over the decades.

One photo showed a young man holding a baby. This man is Stephen, Robinson’s son, who was in the scullery spinning and pounding the fish. The baby was the son of Stephen, who also worked at the restaurant.

Gordon said he also has great-grandchildren who may take over the business one day as well.

Before embarking on a deep dive into the restaurant’s history, Gordon was greeted by an acquaintance.

“Goodbye Oscar. Thank you!” he said before turning to us to explain, “My nickname is, most people call me the mayor because I’m lucky to have a memory that allows me to remember names of people I haven’t seen in 40 years.”

Whether it’s the story of a veteran with PTSD soothing his soul by singing opera to customers in the dining room, or the story of the fight that broke out due to the reduction in expectation in the day, Robinson has seen it all. And he remembers everything.

Well into his 80s, Robinson was born into the family business and has seen it grow for most of his 100 years. He noted that so much had changed in the nature of the restaurant and its physical appearance, but one thing remained the same: the recipe.

“The recipe. The recipe. My grandfather came from Bradford, England, and he brought the recipe for fish and chips that he started in Olneyville Square in 1916 in Providence. In 1922, he was then came to Woonsocket and started his business,” he said.

Robinson explained that his grandfather, Harry Sowden, started out in the United States in the textile business and even bought looms. Then, when the Depression hit, Sowden got resourceful. He used his skills working as a cook at a fish and chip restaurant in England, and his recipe took off in Rhode Island.

The Woonsocket location was a good choice. Robinson said with such a heavily French population in the town, they frequented the Olde English on Fridays – it was their habit to only eat fish on Fridays, especially during Lent.

In the 1970s, Robinson, a young man, had started his career as an engineer, until his father announced that he would like to retire from the restaurant business. It was then that Gordon took over, expanding the dining room and giving the establishment a facelift.

He has continued to develop and innovate ever since, showing off the scoops with holes he made to remove french fries from frying oil in the kitchen.

The restaurant withstood the effects of the Depression, World War II and so many economic changes. However, Robinson said the biggest challenge was in the 1980s, when new fishing regulations severely limited the supply of local fish he could obtain. Instead, they opted to buy fish from Alaska and have it delivered once a week.

But, Robinson says nothing compares to the effect the pandemic and inflation have had on his business.

He said the prices for everything, even shortening, were exorbitant. He also doesn’t have the size of staff he would like.

“It’s very hard to justify staying in business. Woonsocket has been very good to us, they’ve supported us through 100 years, but we just feel like we can’t go that high with the price of the product,” he said.

“Our potatoes have increased some would say between 7 and 15%, I say between 15 and 20% for most of our products. Our products are hunted, not bred. Fish and other seafood are hunted,” he continued.

Robinson says he doesn’t want to change the company to something unreliable as a cheaper alternative. He added that his restaurant had been alcohol-free for most of its history. One of the reasons for this, he said, is that his great-grandfather had a drinking problem. He said he knew many restaurants made a large portion of their profits from alcohol.

With Lent, the company hopes Christians and others will follow the tradition of eating fish on Fridays and patronize its establishment.

“It’s what you call fishcakes. The fishcakes were brought here by my grandfather from England. It’s two slices of potato with fish broken in between.

Around the restaurant and outside you will see signs reminding customers that this is the 100and year of activity.

The anniversary is technically in May, and Robinson said he’s been working on a book — a memoir — full of the stories and history of this institution.