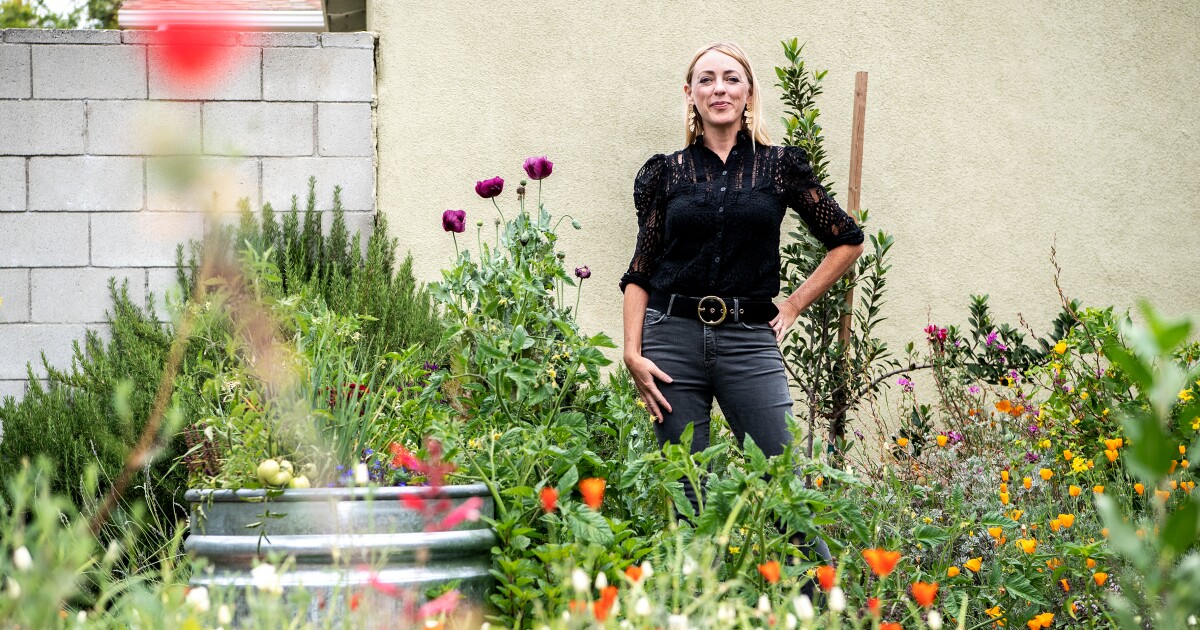 Hello and welcome to the Essential California newsletter. This is Tuesday August 30. I’m Jeanette Marantos, Features Writer for the Times Lifestyle Section, and I write primarily about plants, landscapes and gardening.

Yesterday I became poetic about growing up in the Inland Empire – Riverside, to be exact – where my parents worked tirelessly to create an oasis of lush lawns and water-thirsty plants better suited to the humid climates of the tropics or merry old England.

We get rain at Riverside in the winter – or we used to, anyway. I especially remember the week when my mother died in February 2011 because we were gathered around her at home while the rain poured down outside, a perfect mirror of our grief. It rained so long and so hard that it created shallow ponds in their backyard, where their repeated efforts to grow dichondra – a tender ground cover – ultimately failed.

Some people refer to Southern California as living in the desert, but I learned that in fact most residents of SoCal live in one of the five Mediterranean climates of the world, marked by long, hot summers and dry and wet, cool winters, and I have come to love the diversity and tenacity of the plants that have evolved to grow in these conditions. They have adapted to long periods of scorching heat by digging their roots deep into the ground to find water far below. Some even turn brown and dormant during the hottest periods to wait for rain.

These are not the water-guzzling tropical or English garden plants we have long tried to grow in Southern California landscapes. Many of these so-called drought-tolerant plants come from the Mediterranean basin (think rosemary, thyme and lavender), Australia and South Africa (beautiful examples can be found at Taft Gardens near Ojai) and of Chile (check out the Chilean and Chilean Gardens of Ventura Botanic Garden). South African collections). They are wild and wonderful plants with vibrant colors and shapes reminiscent of the creations of Dr. Seuss.

I like most, however, plants that grow natively in Southern California. Most are deliciously fragrant with the slightest touch, and like the coastal live oaks and sycamores that dot our dry hillsides, these flowers, shrubs and trees can provide shade, colorful blooms and, most importantly, food and shelter. for our endangered birds, the butterflies. and wildlife.

The California Native Plant Society makes no secret of its agenda to change our landscapes from non-native lawns and ornamental plants to native trees and plants. They created the Calscape database to help people easily explore the many native plant options that grow best in their area. The Times has articles on how to remove your lawn and examples of how some have done it successfully. Other helpful resources include Theodore Payne Foundation, Tree of Life Nursery, California Botanic Garden, and Santa Barbara Botanic Garden.

Native plants grow huge and tall in the wild, so they can look neglected in yards where gardeners prune shrubs into perfect squares and blow off even the tiniest leaf left on the ground. But there are now hybrids of native plants, like the Pigeon Point Coyote Brush, a brighter, softer version more suitable for lessons. Can’t we learn to appreciate the sometimes jagged beauty of the grasslands of our backyards (with wildfire precautions)? I learned that leaving the leaves on the ground forms a mulch with multiple benefits for our gardens: it provides shelter for insects and lizards that feed our endangered songbirds, helps retain moisture in the soil and protects the roots from the scorching heat, and when these leaves decay, they provide valuable nutrients to the soil.

I fervently hope we get more rain this winter, after three years of drought, but our temperatures are only expected to rise as the Earth warms and our hot, dry seasons continue to lengthen. That’s why we need to rethink the way we landscape Southern California, adding more native grasses, shrubs, flowers and trees to our gardens and making room for food too. Even fruit trees provide shade, and we will need as much shade as possible in the years to come with climate change, which is also affecting the way we garden in SoCal. I’ll talk more about it tomorrow.

Note: Some of the sites we link to may limit the number of stories you can access without subscribing.

Median rents rose nationally in July, but fell in Los Angeles and the Inland Empire. The drop shows a cooling in the market, some economists said, even as rents continued to rise in San Diego, San Jose and Bay Area — the three most expensive metropolitan areas in the country. Los Angeles Times

Expect a few serious heat this week, starting Wednesday… Meteorologists are predicting triple-digit heat in the Southern California interior this week, and even cooler coastal areas could see temperatures above 90. Don’t leave the house without sunscreen and water. We also have tips for keeping your pets cool and plants alive in this scorching heat. (Tip #1: Give your trees and other outdoor plants a long drink before Wednesday, if you can.) Los Angeles Times

… But stay away from these beaches because they could make you sick. LA County health officials have found bacteria high in the water at four of the county’s most popular beaches, so if you want to stay healthy, avoid swimming or other activities in these waters. less for now, and find another place to cool off. Check out our list of 20 Shady Places Around LA Los Angeles Times

If you’re a fan of this newsletter, you’ll love our daily “The Times” podcast, hosted every weekday by columnist Gustavo Arellano, along with reporters from across our newsroom. Go beyond the headlines. Download and listen on our app, subscribe on Apple Podcasts and follow Spotify.

The Fast Food Recovery Act is in the process of being approved by the governor. The California Senate has approved a bill to improve working conditions for fast food workers by creating a State Fast Food Council to set standards for wages, hours and conditions . The council would reserve seats for labor and business representatives. Los Angeles Times

City of Los Angeles employees delayed their planned raises during COVID-19; now they are reimbursed. City officials have reached deals to restore those salaries to police, firefighters and other city workers that will total about $148 million, using money from the city’s $1.3 billion federal relief package. town. Now, the final deal on the slate — $44.5 million in bonuses and other benefits for police officers — is going to go to city council for approval. Los Angeles Times

Anti-Semitic banners at UC Davis spark a campus police investigation. UC Davis police are investigating an alleged hate incident in which four white men dressed in black allegedly erected banners on campus on Sunday with messages such as “The Holocaust is an anti-white lie.” “We are sickened that anyone at any time invests in such cowardly acts of hatred and intimidation,” Chancellor Gary May said in a written statement. Los Angeles Times

The latest victim of COVID-19? California’s once-stellar life expectancy numbers. In 2021, “California ranked second for having the highest life expectancy rate in the country, behind Hawaii,” reports Melissa Hernandez of The Times. But according to the latest national vital statistics report from the Centers for Disease Control and Prevention, the state’s death rate has plunged deeply, with Californians “losing an average of two years of their lives.” Nationally, the average life expectancy has fallen from 78 to 77 years. Most of the blame goes to more than one million COVID deaths in the United States since 2019. Another contributing factor is an increase in “unintentional injuries,” mostly from drug overdoses. Los Angeles Times

Valley fever is on the rise in California’s Central Valley, thanks to global warming. The disease comes from Coccidioidesa soil-borne fungus endemic to southwestern regions of the United States, including Kern County, where cases have risen from around 1,000 in 2014 to more than 3,000 in 2021. The Guardian

Free COVID testing is going, going….gone September 2. Californians have just days left to participate in a nationwide program that allows residents to order up to three sets of free home tests for the coronavirus, delivered by the US Postal Service. I just checked it and it literally took me 30 seconds to fill out the form. The holidays are coming, which has traditionally meant a spike in COVID cases, so here’s a golden opportunity to stock up. Los Angeles Times

These days, the foggy and cold summers of San Francisco are looking very good. Even Seattle joined the nation’s heat wave this summer, with temperatures hitting 95 in late July. But thanks to a “complex interaction between the atmosphere and the ocean,” San Franciscans can spend the summer in puffy jackets and boots while the rest of us sweat in shorts and flip-flops. And in an increasingly hot world, that kind of weather might be just the ticket for overheated tourists. “A lot of people run away from the heat,” said student Anderes Westlund. “We escape to the cool.” New York Times

Get our free daily crosswords, sudoku, word search and arcade games in our new game center at latimes.com/games.

In 1966 my family took our first summer vacation, seven of us in a station wagon driving from New Jersey to California. Upon arriving at Huntington Beach, my sister was told her friend was on the beach, which turned out to have nothing to do with a beach in New Jersey. Her friend comes in, smiling, tanned, short shorts, long brown hair, barefoot, and I thought, “This is life for me. Fifteen years later, I have made Huntington Beach my home and have never looked back.

If you have a memory or a story about the Golden State, share it with us. (Please limit your story to 100 words.)

Please let us know what we can do to make this newsletter more useful to you. Send your feedback to [email protected]