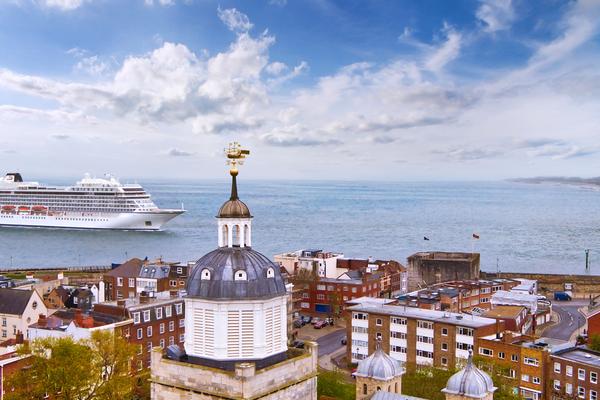 Viking named its new ocean-going vessel, the 930-passenger Viking Venus, during a celebration in the English Channel as the ship set off on its maiden voyage.

The ship’s ceremonial godmother, British journalist and broadcaster Anne Diamond, offered a blessing of good fortune and safe navigation for the ship in a naval tradition that dates back thousands of years.

The May 17 event was also a milestone as Viking returns to service after 14 months of suspended operations.

On May 22, Viking Venus will leave Portsmouth, England, for the first of five round-trip sailings on the ‘England’s Scenic Shores’ route in May and June. Eight-day voyages call at Liverpool, the Isles of Scilly, Falmouth and Portland.

“Today is one of the proudest days in Viking’s nearly 24-year history. When we became the first cruise line to suspend operations in March 2020, we certainly had no idea it it would take 14 months before customers would be welcomed on board again,” said Viking President Torstein Hagen. “Now we’re among the first to set sail again – and with our industry-leading health and safety protocols, we believe there’s no safer way to sail the world than on a Viking voyage.

During the naming ceremony, Diamond helped break a bottle of Norwegian aquavit onto the ship’s hull, using a large Viking ax to cut a ribbon that symbolically held the bottle in place.

Viking is restarting operations with trips exclusively for vaccinated guests to England, Iceland, Bermuda and Malta. The company hopes to announce further departures in 2021 as soon as government approvals are given. A complete overview of Viking’s health and safety program can be found here.