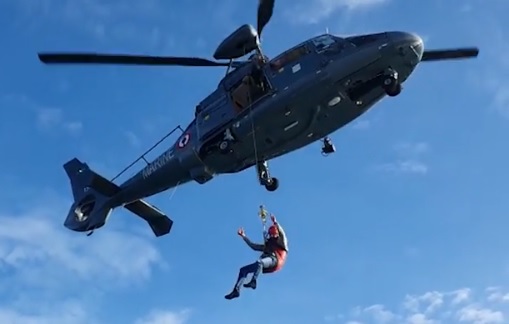 12:01 a.m. (October 31) – The British kayaker rescued in the English Channel after his inflatable boat sank, was trying to paddle towards Spain according to those who rescued him.

The unnamed 28-year-old was rescued by a Dutch fishing boat which found him hanging from a buoy in his swimming trunks.

Extremely lucky to have survived the cold and the many ships that pass through these waters, he told his rescuers that he ate seaweed and drank seawater to survive.

The Mirror, who spoke to Dutch fisherman Tunis Van Luut, said the man was unable to tell them much because he was dehydrated and suffering from hyperthermia.

He, however, claimed to have been at sea for more than four days after attempting to cover more than 1,100 kilometers in an inflatable kayak.

11.27am (October 28) – A British kayaker trying to cross the English Channel to France has been rescued after his inflatable capsized.

According to Dutch news Nu, on Friday October 28, the man was found in a bathing suit hanging from a buoy by a Dutch fisherman.

The man told the crew he had been there nearly 48 hours after his kayak capsized.

The captain, Teunis de Boer, said he spotted him as they crossed the sea. He said he saw him “flailing like crazy”.

The crew hoisted the man on board and gave him life-saving assistance as his body temperature dropped to 26C. He was also covered in bruises and reportedly dehydrated.

In true rescue mode, he was given a bar of snickers and wrapped in blankets. They then contacted the coast guard, which led to the French sending a helicopter to rescue the man, who was taken to a hospital in Boulogne.

The French coast guard told Sky News: “This morning, very early in the morning, a fishing vessel reported that a man in his thirties appeared to have taken refuge on the Colbart Nord buoy, located at the middle of the Pas de Calais traffic. The fishing boat rescued the shipwrecked man and took him on board. This man had left the British coast about 48 hours earlier, to try to cross the English Channel in an inflatable kayak. The shipwrecked man is conscious, but his state of health requires prompt treatment.

It is amazing that the unnamed individual survived with the channel, one of the busiest shipping lanes in the world, and water temperatures sufficient to kill most people.

The British kayaker who was rescued halfway to France will have a lot to say to his friends and family, no doubt many will wonder what possessed him to think he could make the crossing in an inflatable kayak and at this time of year.

Thanks for taking the time to read this article, don’t forget to come back and check the Euro Weekly News website for all your up to date local and international news and remember, you can also follow us on Facebook and Instagram .