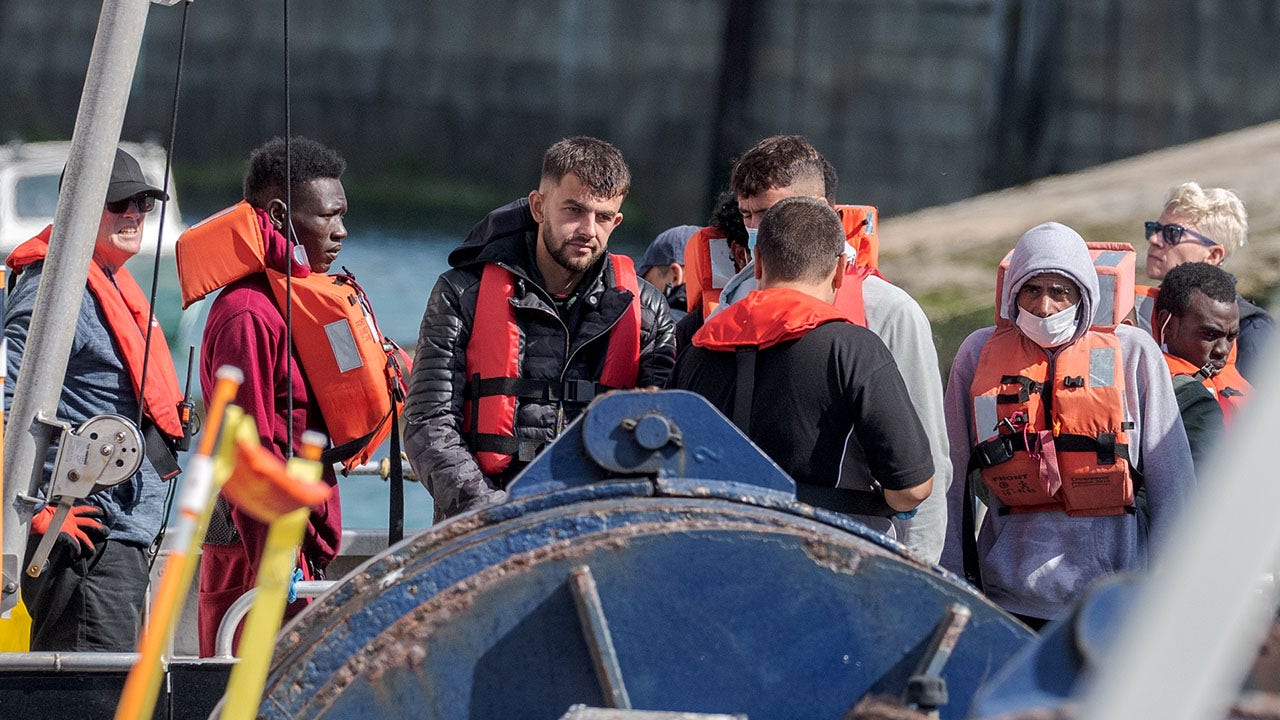 The UK has seen a record number of single-day migrants crossing the English Channel this week as the government scrambles to implement a scheme to send illegal immigrants to Rwanda.

British media reported that 1,295 migrants crossed the English Channel from Europe in small boats, a daily record. The BBC reported that this means 22,557 migrants have crossed since the start of the year.

Illegal immigrants usually crossed the UK by jumping into the back of lorries as they crossed from Calais, France, to Dover, either by ferry or through the Channel Tunnel.

However, the number of people crossing the Channel in small boats increased sharply after 2018. According to UK government figures, there were only 299 illegal immigrants caught crossing in small boats in 2018. In 2021, this number had increased to 28,526.

UK ANNOUNCES AGREEMENT TO SEND ILLEGAL MIGRANTS TO RWANDA, SAYS IT IS MADE POSSIBLE BY BREXIT

August 23, 2022: Border Force escorted 100 migrants to Dover on August 23, 2022, after being picked up in the English Channel. Border Force officials and the military helped migrants disembark at Dover Docks in Dover, UK.
((Photo by Stuart Brock/Anadolu Agency via Getty Images))

Illegal immigrants come mainly from countries far from the UK and have traveled through several safe countries to get to Blighty.

Official figures show that since 2018, Iranians and Iraqis have accounted for half of small boat arrivals, followed by migrants from Eritrea, Syria, Afghanistan, Sudan, Vietnam and then Albania. However, this year Albanians are now tied with Afghans as the nation with the most people arriving in small boats, each accounting for 18% of the total. Additionally, some 2,165 Albanians arrived in Britain via this route in the first six months of 2022.

The UK government, led by Conservative Prime Minister Boris Johnson, has repeatedly pledged to crack down on illegal immigration but has struggled to deliver.

Earlier this year Johnson’s government announced a deal with Rwanda that would see illegal immigrants sent there instead – a move that sparked outrage from left-wing politicians in Britain as well as the United Nations .

The deal was similar in some ways to efforts by the Trump administration in the United States to implement “safe third country” agreements that would see migrants sent there instead. Such agreements are designed to prevent those who use asylum claims as a cloak to cover economic migration.

Johnson said in a speech that the move was made possible by Departure of Great Britain from the European Unionwhich gave Britain greater control over its immigration policies.

“This innovative approach, driven by our shared humanitarian impulse and made possible by Brexit freedoms, will provide safe and legal pathways to asylum while disrupting the gang business model, as it means economic migrants taking advantage of the asylum will not have access to stay in the UK,” Johnson said. “While those who genuinely need it will be adequately protected, including with access to legal services, upon arrival in Rwanda and given the opportunity to build a new life in this vibrant country supported by the funding we provide.”

A group of people, believed to be migrants, land in Dungeness, Kent, following a small boat incident in the English Channel on August 25, 2022.
(Photo by Gareth Fuller/PA Images via Getty Images)

Johnson said seven out of 10 migrants who arrived by small boat were men under the age of 40 and passed through “demonstrably safe countries, many of them in Europe where they could and should have sought asylum”.

However, the first flight in June was blocked after the European Court of Human Rights – separate from the European Union, from which the UK deviated – issued an injunction.

The flights have since been suspended amid the ongoing legal challenge with objections centering on alleged human rights issues related to sending migrants to the East African country.

The Guardian reported on Thursday that the Home Office is planning a new deportation flight ahead of a UK High Court hearing on the matter next month. The UK also this week announced a new plan to “speed up” the removal of Albanians from the country.

“Large numbers of Albanians are being sold lies by ruthless smugglers and vicious organized crime gangs, leading them to make treacherous journeys in flimsy boats to the UK,” the minister said. ‘Inside Priti Patel in a statement. “This abuse of our immigration system and people risking their lives cannot continue.”

The Associated Press contributed to this report.

Adam Shaw is a political reporter for Fox News Digital, specializing in immigration. He can be reached at [email protected] or on Twitter: @AdamShawNY