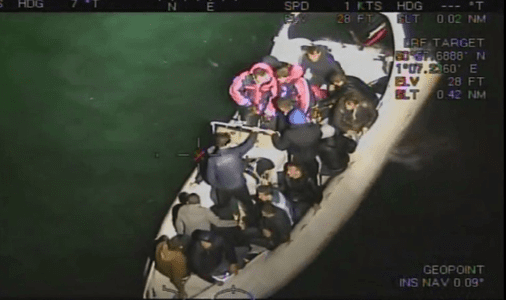 Three arrested in crackdown on migrant smuggling across the Channel

An investigation by law enforcement and judicial authorities in Belgium, France and the UK, supported by Europol and Eurojust, led to the arrest of three people suspected of involvement in migrant smuggling using small craft across the English Channel.

A number of interceptions carried out in 2021 in Belgium revealed the suspects’ links to a network of migrant smugglers which ferried migrants in small boats from France to the UK across the English Channel. The investigation suggests that some of the members of the criminal network operated from France, while others operated from the UK. The exchange of information between the national authorities concerned via Europol and Eurojust channels led to the identification of a number of suspects.

On November 9, following this international cooperation at the judicial and repressive level, the French and British security forces arrested two suspects (an Iraqi and a Kuwaiti) on the orders of the investigating judge in Bruges. At the same time, the French border police made an arrest (an Iraqi national) under a European arrest warrant issued by Belgium.

Meanwhile, investigators from the UK‘s National Crime Agency are working with partners in Belgium to help track down the leader of an organized crime group who attempted to smuggle more than 100 migrants into the UK in small boats and a truck.

Iraqi national Barzan Kamal Majeed, nicknamed “Scorpion” after his WhatsApp avatar, was sentenced to 10 years in prison for human trafficking offenses in his absence before a Belgian court last month.

A warrant has been issued for his arrest and investigators on both sides of the Channel are now appealing for information on his whereabouts.

Majeed moved to the UK in 2013 and lived in the Hucknall area of ​​Nottingham, where he is believed to still have connections. He was deported from the UK in 2015 to the Kurdistan region in northern Iraq.

Belgian prosecutors followed a joint investigation into 31 separate attempts to smuggle migrants into the UK between July 2018 and November 2019 using small boats, trucks and shipping containers.

The investigation had already led to the conviction in the UK of another member of the criminal group Nzar Jabar Mohamad, 35, last year. Mohamad was jailed for 10 years at Hull Crown Court in October 2021 after admitting trying to bring 21 migrants to the UK using lorries and small boats. He boasted of having passed hundreds of women. Twenty-three other people suspected of being involved in this criminal network have been charged by the Belgian authorities.