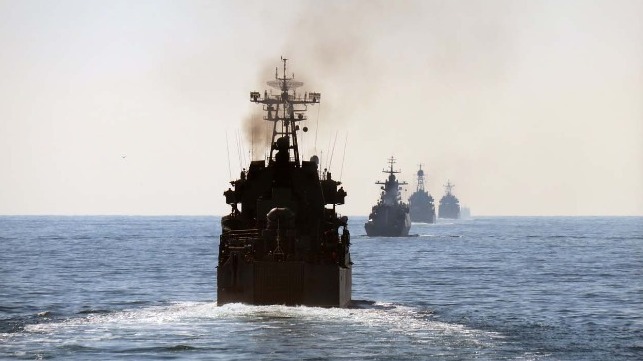 
British patrol boats HMS Tyne and Mersey were recently called upon to monitor the presence of seven Russian Federation Navy ships as they sailed across the English Channel.

HMS Mersey met the Russian frigate Admiral Kasatonovthe support tug Nikolai Chiker and the tanker Viazma off Ouessant, France, and stayed with them across the English Channel and into the North Sea. Its surveillance mission was made more difficult by harsh weather conditions, which meant that the Russian ships took longer than usual to cross as they took shelter before resuming their journey.

Earlier, Mersey worked in tandem with HMS Tyne to monitor four Russian ships crossing the English Channel to the Atlantic. Three Ropucha-class tank landing ships – the Minsk, Kaliningrad and Korolev – and the frigate boiky have been spotted in the North Sea, and Mersey and Tyne followed them closely throughout their transit of the English Channel. Several NATO allied ships and aircraft contributed to the monitoring mission.

The movement of Russian landing craft is of growing interest to NATO amid growing tensions with Russia over its troop build-up on the Ukrainian border. Two more Ropouchkas – identified by civilian observers while Alexander Otrakovsky and the Kondopoga – were recently spotted transiting through the Bosphorus to the Black Sea, where Russia has partially closed the waters near Crimea and the Kerch Strait.

“We quickly moved from protecting the fishery to working with our NATO allies monitoring foreign warships operating near the UK. We are all proud of Tyne be part of the team that protects the interests of the nation,” said Lt. Nicholas Ward, Tyne’s XO.