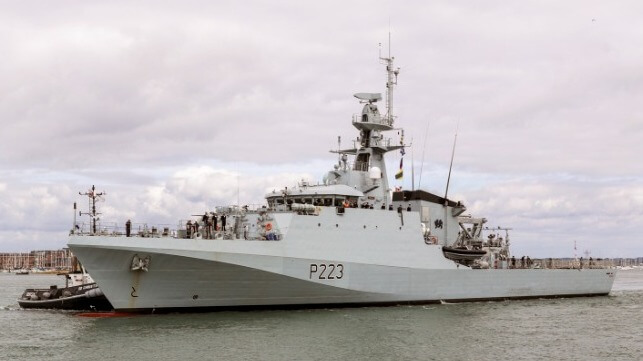 
The Royal Navy has completely ruled out the possibility of engaging in a ‘pushback’ effort to deter migrant ships in the English Channel.

In August 2020, UK Home Secretary Priti Patel called on the Royal Navy to help try to stem the growing number of migrant smuggling. “I am working to make this route unviable,” she said in a statement at the time. “This involves: 1) stopping boats leaving France in the first place; 2) to intercept the boats and turn back those who try to make a crossing. The UK Ministry of Defense pledged to consider how it could “most effectively assist” the Home Office, but did not deploy forces to the effort in 2020 or 2021.

In recent weeks, Royal Navy sources have quietly told the British press that they are not interested in the pushback effort. “I’m not sure pushback would work; it is not part of our ethics,” a source from the service told the Guardian.

In comments to parliament on Wednesday, Patel said that despite rumours, the service’s decision was not yet final. “The job is not done, so it’s totally inappropriate for me to comment on the operational planning of what the Navy or the Border Force will do,” she said.

However, in a follow-up message on Wednesday evening, the UK Ministry of Defense clarified that the decision had indeed been made. “The Royal Navy and Royal Marines will not use push-back tactics in the English Channel, although a military commander will retain the existing capability to order border forces to use them where appropriate,” the department said in a statement. message on Twitter.


the @Royal Navy and the @RoyalMarines will not use pushback tactics in the Channel, although a military commander will retain the existing ability to order the Border Force to use them if required.

Sea migration to the UK peaked in 2021 and more than 28,000 people crossed the English Channel in small craft in an attempt to reach Britain during the year. On November 12, a record 1,185 migrants crossed in a single day; the previous record of 853 had just been set on November 3. The high rate of arrivals has been a persistent source of political difficulties for Prime Minister Boris Johnson’s government, and Patel has repeatedly pledged to bring the numbers down.

Human rights NGOs (and the French government) suggest that the circumstances are also difficult for the migrants themselves. Hundreds of people had to be rescued by the UK Border Force, French patrol boats, the British volunteer-run RNLI rescue organization and passing merchant ships. Not all the migrants survived: on November 24, a collision between a container ship and an inflatable raft claimed the lives of at least 27 people.