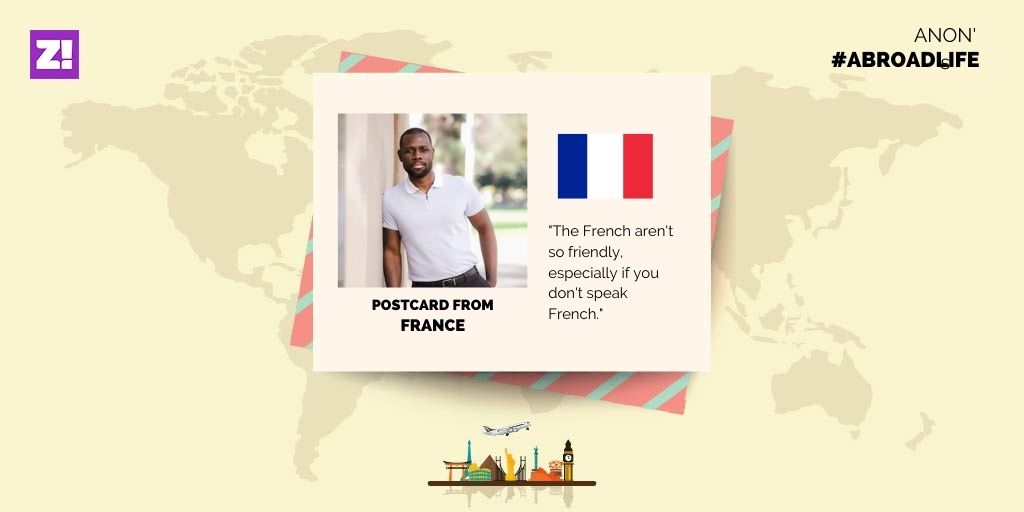 “The French have a beef with people who speak English”

Today’s topic on #AbroadLife is the main character of a tale of three countries. After deciding to study abroad nine years ago, he was finally able to do so in 2021. He says he is the only black person in an English town, having fun in Greece and he faces the language barrier in France.

Where are you now?

I am in Nantes, France.

How did you get there?

I got an Erasmus Mundi scholarship to study for my Masters in Europe, and it took me through three countries so far. It is a joint master’s degree program and it is administered by three universities in three different countries, with tuition fees fully paid.

Savage. When did you decide to leave Nigeria?

In 2013. I entered a federal university in 2012 and was admitted to study fisheries and aquaculture. I wanted medicine, but that’s what they offered me instead. So I spent my freshman year trying to be serious and get good enough grades to help me pass at least pharmacy.

I didn’t know anything about scholarships at the time. The people who ran the print centers at school would come to class and tell us to apply for scholarships. But I always thought it was a scam just to collect the ₦1000 registration fee.

The following year I started seeing my friends get some of the popular scholarships at the time; MTN, NNPC, Agbami, etc. These people didn’t have grades as good as mine, but they still received scholarships worth around ₦100,000-200,000 each year.

That’s when I really understood that scholarships were a thing. I made the decision to get a scholarship to study abroad for my masters degree. The first reason was that I wanted to become an expert in my field, and the second reason was that I knew I could do it. I started researching and documenting things in my senior year.

When did you start applying for scholarships?

In 2019, during my NYSC in Akure. I applied for two scholarships in the Netherlands and the UK. I was actually hopeful because my grades were great, but I was served breakfast on both sides.

LMAO. What did you do next?

I got a job at the end of my NYSC and started thinking about giving up my scholarship dream because I was earning enough silver From this. On the other hand, I had nothing to lose if I didn’t get a scholarship, so I decided to try again. The only difference was that my motivation wasn’t as high as before. Money can distract you from your dreams, to be honest.

The following year, during COVID, I applied for two more scholarships. One of them was the Commonwealth Scholarship administered by the British government, and this is the one I finally got. I was selected for funding to study in the UK but unfortunately that did not happen then.

Due to all the economic damage caused by COVID, the UK government has decided to cut funding for that year. So I received an e-mail saying that I still had my scholarship, but that I had to postpone my scholarship until next year. The following year, I reapplied for the other scholarship that had rejected me. This time I succeeded. Now I had two scholarships and could weigh my options.

The commonwealth scholarship offered me full funding to study in the UK for a year after which I have to return to Nigeria to develop it. But the other exchange did not have this clause. Even better, it was a joint Masters program administered by three schools from different countries: Scotland, Greece and France. It meant I was going to see more of Europe. I chose the second scholarship and started the migration process.

How was the process?

Even though it was my first time leaving Nigeria, I found the process quite easy. I received a letter from the scholarship office stating that the scholarship would cover 100% of tuition fees and a monthly stipend. I didn’t have to worry about providing proof of funds and stuff like that. I got a visa within three weeks of applying and moved to the UK in September 2021.

Guide me through your journey through Europe

I first arrived in London. COVID was still active at the time, so I couldn’t immediately move to Scotland, and my lessons were online. I already had lots of friends in the UK, so I stayed with one of them. I stayed there for about three months before moving to a town called Oban in Scotland.

I expected the UK to be cold, and it was. I expected it to be beautiful; it was too. But my God, the apartments are tiny! My room was smaller than my room in Nigeria, and I had to pay £450 a month in rent, my annual rent in Nigeria.

To make matters worse, I had to share a kitchen with other people in the building. So all I really had for myself was a room and a toilet. And the buildings weren’t so modern because they were trying to preserve their architectural history. To top it off, I was the only black person in town.

It wasn’t weird at all though. The people were very welcoming and I sometimes went to bars to play Afrobeats. They loved it. I had a great time, but only spent three months there before I had to move to Greece for the rest of my program.

Honestly, Greece is like Nigeria Pro Max. When I got there I thought, “Did they take me to Lagos by mistake?” People were honking their horns so loudly, and no one respected the zebra crossings. This gave chaos at the level of Ojuelegba.

Once I tried to use a zebra crossing, thinking the cars would be waiting for me like they would in the UK. Come see it swerve. I was the one dodging the cars. At that moment, I knew I had found Nigeria’s twin. It is a very interesting and naturally beautiful country too.

I lived in a city called Heraklion, and it has a beautiful landscape, beautiful beaches, and many historical sites. Things were also cheaper in Greece than in the UK. Their economy was worse, which meant that the allowance I received translated into a lot more money for me. The buildings weren’t that pretty and you could tell the country was struggling against sapa at the time.

tell me about people

Greeks are friendlier and more laid back than those in the UK. Back in London, everyone was minding her hustle and didn’t really care about you. But no one knows how to have as much fun as the Greeks.

About 70% of Greeks speak English, so I could do very well in social circles without knowing Greek. Families are bigger because they don’t migrate very often.

How long did you stay there?

Six months, before having to move to Nantes in September.

Nantes, in France. It’s a student city, so I met more people there from different parts of the world. For the first time since London, I saw a lot of black people. It’s a bit like the UK actually. But the main difference is the language. What’s annoying is how snobby the French are about their language. It’s almost as if they have a long standing beef with English speakers.

The first thing I learned to say in French was “I don’t know how to speak French”. The goal was to get the person to speak English with me, but nine times out of ten their face would change the minute I said it. The French are not as friendly as the Greeks, but they are even less friendly if you don’t speak French. They’ll say they can’t speak English and talk to you, even though they actually can.

It’s so serious that even in hospitals, doctors only speak to you in French. The country is also very bureaucratic; there is a lot of unnecessary paperwork to manage, and everything is in French. Emails from authorities come in French, and when you call for clarification, they speak French. So language is a real social barrier for me here. The luck in all this is that my classes are in English. Otherwise I would be in trouble.

How do you handle this?

I’m currently learning Sha French, so these people can stop streaming me anyway. I have French lessons twice a week, and that helps. The good part is that my classes across the country have been in English, so the language does not affect my studies in any way.

First of all, it’s very multicultural. In other countries, the diversity came from people in my own class. But we are the same people who have been moving from place to place together for a year. In Nantes, there are people from all over the world. Once I went to a church and saw so many black people I thought I was back in Benin, Nigeria.

Another thing I like is the fact that it’s a welfarist state. The government cares about people who don’t earn much. My allowance is around €1,000 per month. But as I am a student, I get up to 60% off my rent of €450, financed by the French state. Same goes for food and a bunch of other things I need to stay alive.

And how has school been so far?

Moving from one school to another in different countries is very difficult. Not only is the education system different from Nigeria, but each country has its own system. In the UK we didn’t have proper exams; we wrote essays that would count for the assessment score. Most of my classes were online, and there’s not much you can learn without being in a classroom. In Greece I had proper exams and the lessons were in person. It was a better learning environment for me as I could directly interact with my classmates and ask questions in class. I would say that my semester in Greece was the easiest so far.

France basically combines everything. Essays, exams, homework, field trips, etc. We do it all.

So where will you go from here?

Back to Greece to complete my program. It is a two-year master’s program. I did the first semester of my first year in the UK and the second in Greece. The third is what I am currently doing, and the last will be in Greece. I can’t wait to leave the stress of this place behind and return to my second Nigeria.

LMAO. Your love for this place is really something

Hi! My name is Sheriff and I’m the author of Abroad Life. If you are Nigerian and live or have lived abroad, I would like to tell you about what that experience is like and introduce you on Abroad Life. All you have to do is complete this short formand I will be in touch.