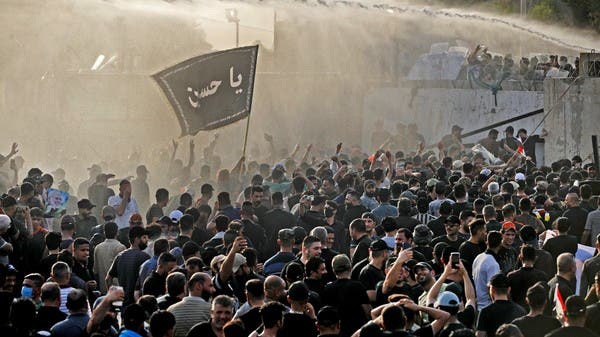 A power struggle in Iraq between Shiite cleric Moqtada al-Sadr and Iran-aligned rivals is testing Tehran’s ability to avoid a conflict that could harm its interests and further destabilize the oil-rich country.

As Sadr’s supporters camp out in parliament and his opponents demonstrate in the streets, the fight for a new government has strained a political system that has been rocked by crises since US-led forces took over. overthrew dictator Saddam Hussein two decades ago.

This adds another destabilizing factor to a belt of fragile Arab states between Iran and the Mediterranean – Iraq, Syria and Lebanon – all of which fall within Iran’s sphere of influence and have suffered major conflicts or crises over the past decade, including the battle with ISIS.

For Iraq, where the balance of power tilted towards Iran after the 2003 US invasion, the struggle is adding to divisions in a country also plagued by rivalries between Sunni and Kurdish Arab groups that control the north.

So far, neither side appears ready to give ground in the 10-month stalemate, which began when Sadr emerged victorious in October’s elections and sought to form a government on his terms, to be thwarted by his enemies.

For now, the sides – both heavily armed – appear to be avoiding violence, aware of the impact it would have on Iraq and the Shiite majority that has been bolstered by the political system the US has built after. overthrowing Saddam, a Sunni.

But amid dramatic scenes in Baghdad, where Sadr supporters overran the fortified Green Zone that houses state buildings and embassies over the weekend, many Iraqis are worried about possible violence.

In a sign of Iran’s concern, one of its top military commanders, Brigadier General Esmail Ghaani, has visited Baghdad in recent days in a bid to prevent tensions from escalating, said a Western diplomat.

An Iraqi official with the Coordination Framework, an alliance of Iran-aligned factions, confirmed the visit but said Ghaani did not appear to have succeeded, without giving details.

The Iranian embassy in Baghdad did not respond to a request for comment.

Ghaani, who leads the foreign legions of Iran’s Revolutionary Guards, has struggled to wield the influence of his predecessor, Qassem Soleimani, who was killed by a US attack in 2020.

“Iranian influence has had its ups and downs and has diminished to some extent,” said Renad Mansour of Chatham House, a think tank. “This process of electing and forming the government has revealed the fragmentation … among political parties, which makes it very difficult for Iran.”

The crisis comes at a difficult time for Iran elsewhere. The heavily armed Hezbollah and its allies lost a parliamentary majority in Lebanon in May, although they still have great influence.

Sadr, heir to a prominent clerical dynasty that fought off US forces after the invasion, has long opposed foreign influence.

He upped the ante in June when he asked his lawmakers to leave parliament, ceding dozens of seats to Iran-aligned factions. Their subsequent moves towards forming a government without Sadr prompted the takeover of parliament.

Sadr’s recent call for unspecified changes to the constitution may indicate that he wants to upend the whole system.

But some analysts question how much he really wants to change a system that has served him well: Sadr dominates much of the state that employs many of his supporters.

“Sadr is not a revolutionary. He wants the system to continue but with him in a more dominant position,” said Toby Dodge, a professor at the London School of Economics.

Dodge described the standoff as “a feud among an increasingly unpopular elite” in a country where poor governance and corruption have inflicted power and water cuts, poverty and unemployment on Iraqis, despite the enormous oil wealth.

Those same conditions fueled mass protests in Baghdad and southern Iraq in 2019, in which security forces killed hundreds of protesters.

“There could be miscalculations and errors. But it seems to me that at every step of this process, one or the other side took steps to avoid violence,” Dodge said.

The US maintains around 2,000 troops in Iraq to fight ISIS remnants, far fewer than the 170,000 US troops there at the height of the occupation.

Once involved in secret negotiations over Iraqi government formations, U.S. officials have remained largely aloof from such contact in recent years, according to Iraqi officials.

Vali Nasr, a Middle East expert at the Johns Hopkins School of Advanced International Studies in Washington, said Iraq did not appear to be a high priority for the United States.

“It (Iraq) was not treated as a game-changer for the region, which it could end up being if Iraq lost whatever modicum of stability it had,” he said. he declares.

“It’s too early to call this a loss for Iran, it could end up being a loss for everyone, and then the question is who picks up the pieces next,” he said.

The US State Department did not immediately respond to questions about this story.

The US Embassy called for calm and for the Iraqi parties to avoid violence and work peacefully to resolve their differences.

Hamdi Malik of the Washington Institute think tank noted signs of restraint on both sides, but said conflict was a risk.

“Any civil war between Shia groups will have a profound impact not only on … the people of Iraq, but on the wider region and even on other parts of the world, especially because of the possible disruption of the oil supply because much of Iraq’s oil wealth is in predominantly Shia parts of the country,” he said.

Threat of protests and violent escalation are spreading panic in Iraq

Explanation: What is driving the escalation of the power struggle in Iraq?