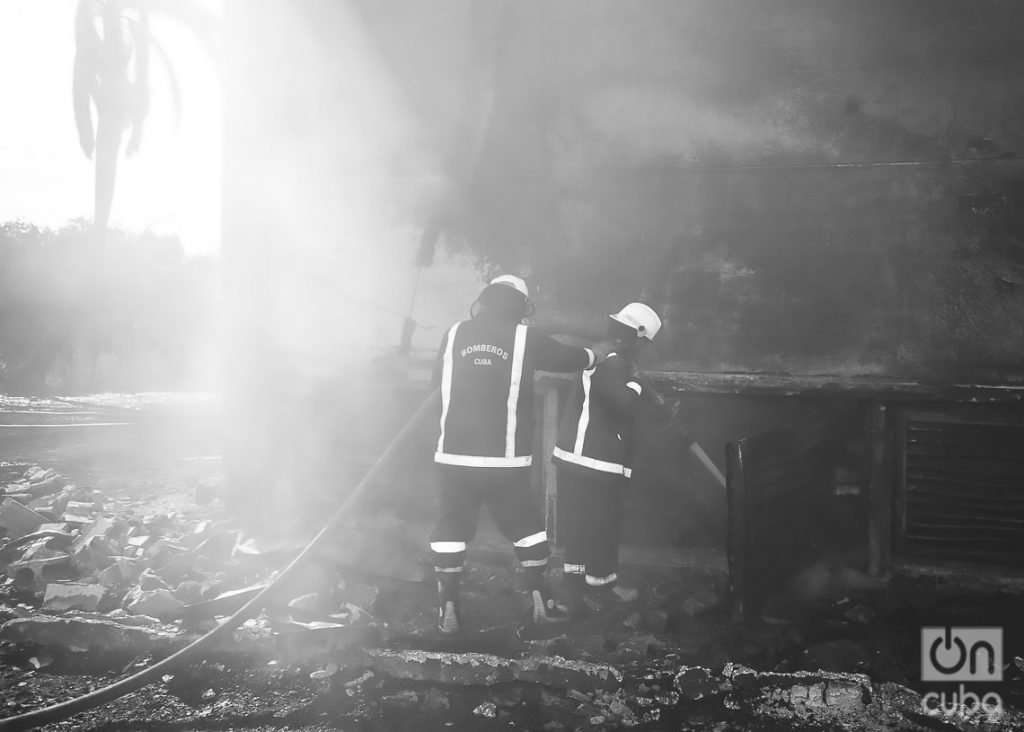 Story of a firefighter’s father

It’s been more than half an hour since Fabián’s father opened the doors of his house to us, very close to Abra del Yumurí. After a long conversation, his gaze is still lost, his voice wavers, his hands are shaking and the sweat is streaming, as if his body were drowning in an eternal and silent cry.

Since all this time, he has not risen from a moldy armchair which is at the end of the patio, the place where he has taken refuge to release the tensions and the ideas which torment him since last Saturday August 6. , when a message from an unknown number woke him up at 4:18 a.m.

“Dad it’s Fabian now the emergency alarm went off and we had to go there don’t worry I’ll be fine watch out something happens so you get out from Versalles, the situation is serious , be careful, oh, and I am the best, I am a FIREMAN HAHAHA”, read the message word for word, in which the high accusation of enthusiasm and innocence of a boy from 19 years stands out more than his spelling mistakes (in Spanish).

The short text was written by Fabián Naranjo, a young man who had spent a year and four months in military service at Command 3 of the Fire Department, located at Juan Gualberto Gómez International Airport in Varadero. From there, before dawn on Saturday August 6, he departed for the supertanker base, where a large fire threatened the entire industrial zone of Matanzas Bay.

“Fabián wrote to me from a friend’s phone because he didn’t have one. At first I was amazed when I saw this, although I immediately realized what was happening and couldn’t sleep. I went crazy, I didn’t know what to do…”, recalls the boy’s father, who could not help worrying that his son was confronted by an unknown force.

What happened from that moment, Fabián’s father recorded in his memory, although he lost track of time a little and could not make an accurate chronology of events. What is clear is that he experienced everything as if he were trapped in a horror movie.

“At dawn, my brothers started calling me to tell me that there had been injuries and burns at the base due to an explosion, but that Fabián was not there. They had spoken to him the night before by some means and he had told them that his truck had not come out for the fire after the first alert. It was then that I told them of the message, of the second alert; they were speechless,” says Fabián’s father.

Amid the chaos, uncertainty and nerves, the family thought only of combing the hospitals. They went first to Faustino, where they found dazed boys with burns and fear in their eyes. They knew nothing of Fabián or did not know him, and the name did not appear on the list of wounded they had on admission. They went neighborhood by neighborhood, and nothing.

They did the same, unsuccessfully, to the military hospital and to the pediatric hospital, where they had also transferred the wounded during the incident at the supertanker base, which already on Saturday morning showed a grim picture, a scene of war after several explosions that left two fuel tanks with over 70,000 cubic meters of crude stored under flames.

After making the rounds of hospitals, Fabián’s father went to forensic medicine, anxious to find news of his son. “I stood outside without speaking to anyone, waited a while, took a few pictures of the cloud of black smoke rising above the city, but in the end there was no movement. So I decided to go home, I was exhausted, desperate, I felt very bad.

Fabián’s father has raw blisters on his hands. He has spent hours cutting the grass non-stop in the yard in front of his house, but he cannot distinguish whether large beads of sweat are running down his face from work or from tears from the death of his son, l one of 16 people who lost their lives. in the Supertanker Base fire.

Shirtless, red-skinned and swollen-eyed, he takes a breather and leaves the garden scissors on a bench as he tries to put the events of Saturday August 6 in order. No matter how hard he tries, he can’t explain what happened or what went through his mind from the time he got home after visiting the hospitals until they called him for inform him that a command post had been set up at the Velazco hotel, with the mission of informing and caring for the relatives of the firefighters who were fighting the fire.

“When I arrived at Velazco, I was really sick. My blood pressure went up and down, I had a lot of anxiety, I was confused, I didn’t even know what day it was. Fortunately, there they treated me very well, doctors and psychologists managed to calm me down a bit.

“It was then that I was able to talk to the staff of the Ministry of the Interior. They gave us details of what was happening and did not hide anything from us, on the contrary, they were very clear in explaining to us that the fire was not under control and that it was not possible to enter the area to look for survivors,” says Fabian’s father.

Before being told that because of the time that had passed since the explosions and because of the chaotic images seen on television, he already suspected that he would never see his son again.

“There was a time when I was already convinced of what had happened and I was aware that after so much time and with extreme temperatures, it was impossible for my son to be alive. That’s hard to accept, but I knew it, and we confirmed it later.Separately, each family was informed that the boys were dead.

It is almost two o’clock in the afternoon of Sunday, August 14. Just over 48 hours have passed since Cuban fire authorities officially declared the largest and most devastating fire in the country’s history extinguished, leaving room for the search for the remains of the missing.

The sensitive and painful task is carried out by the most eminent forensic and forensic specialists in the country, who in the eyes of the world began their work at the scene of the events last Friday morning, although in reality they have been compiling information for a long time before.

“I can’t remember what day it was, at what exact moment, because I repeat that I lost track of time, but since we were informed that the boys were dead, the forensic specialists have met to ask us about all kinds of signs of our children, whether he had a tattoo, a broken leg, a broken arm, a gold tooth or any other distinguishing mark.

“They know that maybe none of this data is of any use, but they have to follow all the steps of finding and identifying the missing. Any detail can be relevant at some point in the investigation,” says Fabián’s father, who is grateful for the constant sentimental and emotional support he has received from strangers.

However, the complexities and long delays of this process keep Fabián’s father on his toes, as he patiently waits to get to the place where his son fell: “I asked the Ministry of Inside let me get to the scene, see it in black and white, live. I know it’s not possible now, but at some point I would like to stand here and pay my respects to my son and all who died with him.

Another pending tale is to visit Fabián’s companions, those who survived and helped put out the fire. “They were a family and we were part of it. We interacted, we supported them, we had the best relationships and a lot of rapport with the officers and the leaders, who were like fathers to my son. Now they are all very, very traumatized, because they know better than anyone what they really went through during those hours of service.

“From afar, I understand they faced something of a magnitude unheard of, both for young boys and for more experienced firefighters. Their preparation is to put out fires and they had advice from prepared people, with knowledge, but unfortunately it overtook them. It wasn’t a fire in a house, a building or a sugarcane field, it was something very different from the usual, so they also needed different techniques and means. No formation can simulate what they faced, as fuel fire has very dangerous characteristics…. I don’t know, I’m not an expert or anything like that.

“Can you tell me your full name? I asked Fabián’s father towards the end of our conversation last Sunday, August 14.

“I can tell you my full name so you know it, but I don’t want it published. Like me, there are many parents of brave children who have gone through the same thing as Fabián, and many of them may not have the opportunity to give an interview and tell their story. That’s why I prefer to be named only as Fabián’s father.

And so, without fanfare, without publicity, without press, without photos on social networks or anything like that, Fabián’s father and the family pay tribute, in silence, to a young man who has a whole life behind him. The first place they honored him with a small wake was at the Coliseo, his hometown, where some of his childhood friends gathered.

They did the same in the neighborhood where he lived in Matanzas, at a point that connects the Yumurí Valley to the neighborhood of Versalles. Precisely, they hope to meet there on August 24, when Fabián will be 20 years old. “I would like his friends to remember him with a smile, as the nice and dreamy boy he was.

“Fabian had many projects. Right now, in September, he was going to start an immigration course which excited him a lot, because it was going to allow him to be more independent and to buy a telephone, which he wanted the most. I told him jokingly that as soon as he started working he would earn more money than me, who had been sweating it out for almost 40 years,” Fabián’s father recounts with an expression of deep pain on his face.

“It’s on the inside. I’m not creating any kind of drama, because I have my family here, the boy who is only seven, and I don’t want them to be affected anymore. Sometimes I wake up alone early in the morning and start crying, I can’t sleep. That’s why I started cleaning this place like crazy these two days, just to not think, get tired and go to bed. I want to let go of everything, let off steam, because it’s very difficult. This is the second time something like this has happened in my family. When I was two years old, my 19 year old brother died in an accident. My parents always carried this pain inside; Now it’s my turn.”