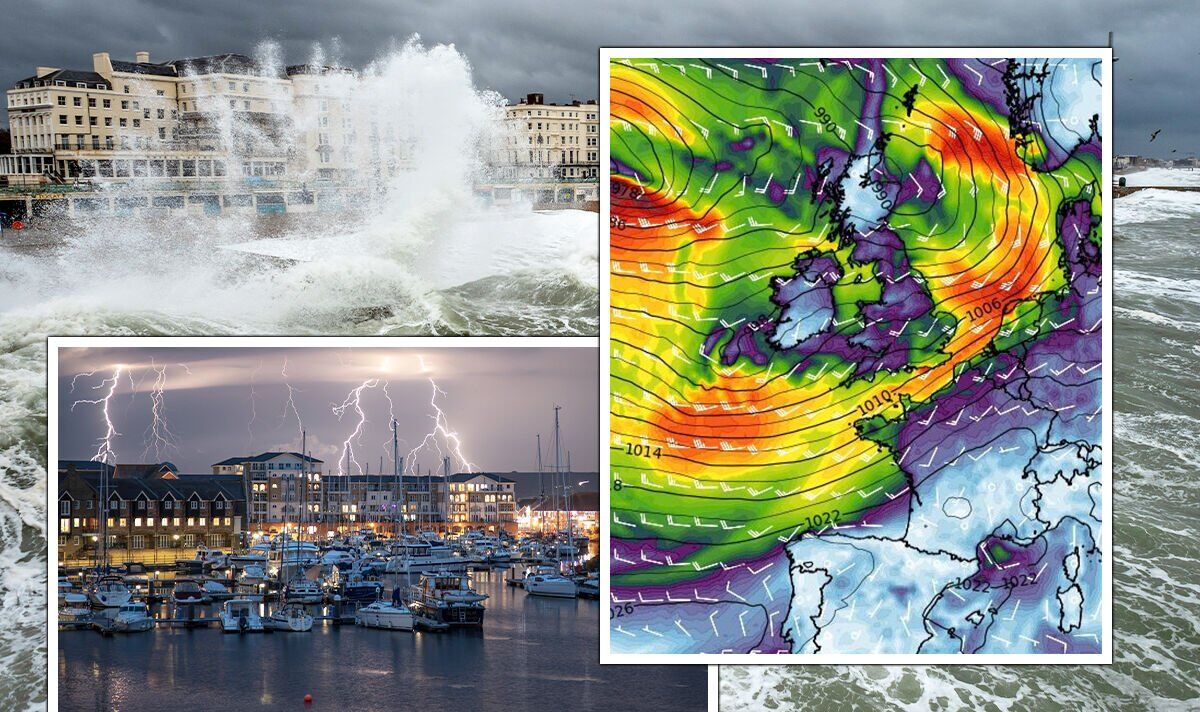 Storm Claudio battered southern England from Kent to Dorset overnight with winds of up to 70mph pounding isolated coastlines. It was caused by a small area of ​​low pressure, according to the Met Office, which is tracking eastward. The strongest winds hit the Channel Islands and northern France, but many said they felt the gales rattling the windows of coastal towns. The storm was named by Météo France and is set to expire this morning – but its aftermath will be present for much of this week.

Met Office chief meteorologist Neil Armstrong said: “The most significant impacts from Storm Claudio are expected in northern France which is why it has been designated as a system by Météo-France. What this means for us in the UK is that high winds are possible along much of the south coast of England.”

After Storm Claudio moved eastward early in the day, what remains is a rainy day for much of the UK, with Wales and parts of southern and central England being likely to see the most frequent showers.

NetWeather Senior Forecaster Jo Farrow explained in her blog post that the first day of November will bring a gloomy day for many – with stormy weather and even hail. She said: “This small but brisk low is moving across southern Britain and the North Sea on Tuesday morning, swinging its fronts over northeast Britain.

“Sunshine and showers will follow on Tuesday, but there will be more heavy showers over southern Britain by mid-afternoon. Again there will be a chance of thunder and hail.”

She added more on how this breezy November pattern will ruin the October heat that many have grown accustomed to: “The second half of October was strangely warm with high temperatures in the 20s, even the most low of 20 degrees Celsius.

“This week we are going to lose the strong southerly airflow that has brought this very balmy air all the way through Western Europe. There are some southern jolts along the way, but overall the UK will see more westerly airflow off the Atlantic and temperatures will drop to where they should be in early November.”

The Met Office is also predicting wetter and windier weather for people on Wednesday, with more low pressure moving in from the west.

This time the winds are likely to be strongest along the Irish Sea coastal areas – including West Wales, North West England and South West Scotland, as well as the east coast of Northern Ireland.

This constituted a second yellow weather warning in place for tomorrow covering these areas from 7 a.m. to 6 p.m. The warning reads: “A wave of very strong southerly or southwesterly winds will affect some western coastal areas on Wednesday.

Deputy Chief Meteorologist Steven Keates added: “In the warning zone, gusts are expected between 55 and 65 mph. This is coupled with low pressure moving north west across the UK bringing heavy rain on Wednesday, particularly to parts of south west Scotland, Cumbria and the West Country of Wales, although much of the UK will see rain throughout the day.

“In addition to high winds in the warning area, many parts of the UK will experience strong, gusty winds, at least for some time, on Wednesday.”

Regarding the outlook for the rest of the week, NetWeather’s Jo Farrow added: “So it won’t be as hot as it has been and there will be bouts of wind and rain as the jet stream directs low pressures towards us.

“Such a trough on Wednesday seems to bring very wet and windy weather from the west. In the wind and rain, it will be cold during the day and Tuesday evening seems cooler with temperatures more widely down to 3-6 ° C. The early Friday seems colder in the north but there should be milder air from the south for the weekend.”

The Met Office forecast for Thursday to Saturday continues: “Change with periods of wet and windy weather interspersed with drier and brighter interludes. Windy at times with gales along some coasts. Temperatures near average .”