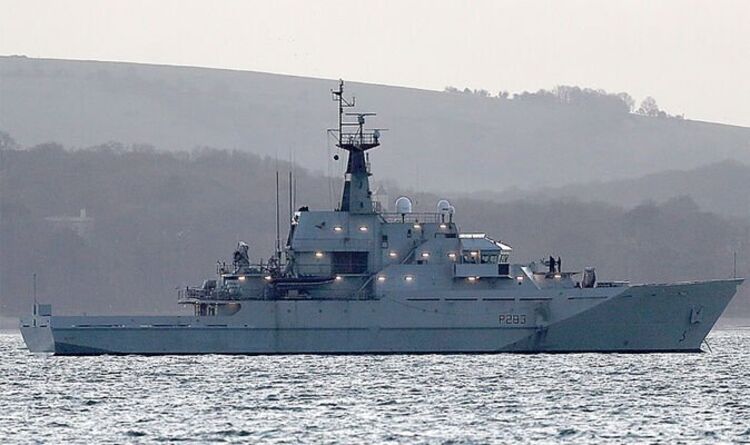 Armed Forces Minister James Heappey admitted Royal Navy ships were sitting too high above the water to help migrants get out of dinghies safely.

He said the ships would be flanked by smaller ships and that navy chiefs were “crunching their calculators” to work out the number.

Boris Johnson is giving the military responsibility for overseeing Border Force and other government agencies in the Channel, in a bid to stem the number of migrants coming to Britain.

Mr Heappey said that in some cases the navy had to “follow” migrant boats on the shore and make beach arrests “because it would be too dangerous to do otherwise”.

He said: “You will need additional platforms suitable for the task, you need a very low outboard height to be able to safely bring people from a dinghy into your vessel.

“Some dinghies will be so fragile and overcrowded that unloading them in the middle of the English Channel can pose a greater risk to life.

“We will be providing additional vessels in an effort to coordinate the effort, but the Navy sailors, the Royal Marines, are unwarranted and unable to enforce the law.”

Mr Heappey added: “We will need up to 10 other larger vessels that you would use to do the cross-Channel bridging and a number of smaller vessels to follow the dinghies to shore. we may need much less. That’s what the admirals calculate on their calculators.”

He said Operation Channel was “pretty successful already”, despite a record high of at least 28,000 migrants arriving in the UK last year.

The Minister said 97% of dinghies launched had been identified, observed and tracked as they made their way to the UK.

He added: “I think the fact that you know where 97 per cent of the boats are gives you the ability to have quite a high degree of control over how people land in the UK.

“Whether they are then intercepted at sea or those who disembark arrested or taken away is the concern.”

Home Secretary Priti Patel’s Nationality and Borders Bill will emphasize Channel arrest, which Mr Heappey said ‘acts as a deterrent in itself’.