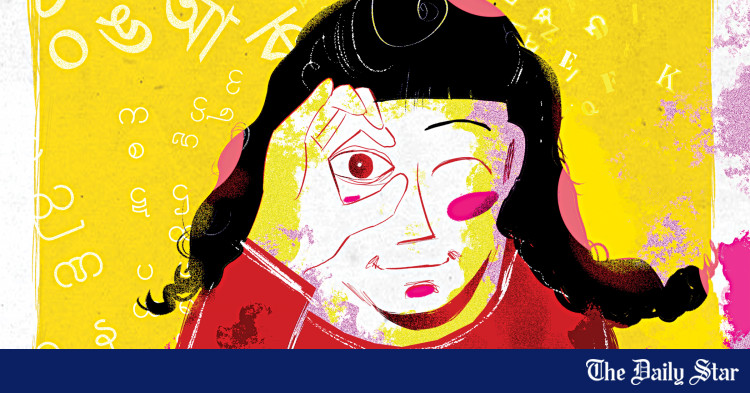 Growing up in a bicultural home, I was exposed to two languages, two cultures, as a child. I chose both languages ​​as my mother tongue, Bangla and Rakhine. Finally, a third language, English, penetrated my little bubble when I registered for school. It quickly took over the other two languages ​​and became the language in which I read my first book, made my first friend at school. It is through the amalgamation of these three languages ​​that my universe takes shape.

The Rakhine language is a dialect of the Burmese language. I first boarded a flight to Yangon from Dhaka in 1999 at the age of three with my mother to visit her family, who had emigrated there in the late 1980s. very first Burmese I heard was at a Sunday Bazaar with my Mingree (maternal uncle). So, for me, Burmese reminds me of the long-lost summer vacation of my childhood. It reminds me of my Doh-Doh (grandmother) and the story she told me of the witch who turned a prince into a wax statue, and how a warrior princess saved him from melting under the sun . This language, for me, has a strange connection with the smell of cilantro and delicate rice noodles dipped in fish broth, and with the street cart that sold my favorite Burmese dessert: soft parathas with condensed milk. spread. In this language, I can hear the excited cries of my cousins ​​as they jump into the chlorinated waters of Sukhentha Park near Thaketa Township.

For all the latest news, follow the Daily Star’s Google News channel.

Despite this feeling of comfort, I feel more connected to English because of my love for books. As a teenager, I carried stacks of used Nilkhet books every month. I was a lonely child and grew up to be a lonely teenager. I have never been very attached to my peers. Therefore, books were all the company I had. They were my playmates as a child and my closest confidants as a troubled teenager, and through this the books sealed my bond with the language.

Although my mother is not Bengali, Bengali holds a very special place in her heart. She is an avid listener and ardent singer of Rabindra Sangeet; the one who always persuades me to refresh my Bengali and who ensured my eloquence there by reading me stories of Tagore and Sharat Chandra when I was a child. When I was 15, I entered a national writing contest. Candidates had to submit a poem or short story in Bengali on the war of liberation. To my disbelief, I had won that contest! It took me a while to soak up my new identity as a child writer, but after that I submitted several short stories to a few Bengali magazines. Since then I have become a voracious reader and collector of Manik Bandhapadhay’s books; his works captured my love for the Bengali language.

In the meantime, when we moved to fifth grade, we had a new compulsory subject in addition to other regular courses: French. I pursued it solely for academic purposes; I couldn’t continue my language practice and subconsciously say goodbye to him. But deep in my heart, I am determined to resume French lessons.

Language is one of the most powerful tools we can use to empower the most marginalized in our societies. Can you imagine a world where everyone could interpret religious texts? Exploitation disguised as religion could become a thing of the past. When Martin Luther translated the Bible into German in 1534, which was the language spoken by the masses, it became a revolutionary act – the translation not only helped shape the ideas of the Reformation, but also had a revolutionary impact about life. ordinary people. She was so radical that she broke the absolute powers of the authorities that were once believed to be invincible. Events like this prove how empowering language is by breaking down barriers and ending years of oppression. The goal is not just to pursue a language, but to communicate and spread information and ideas.

I belong to the Rakhine community, and with frequent visits to our ethnic colonies in Kuakata, I realize every day how important it is for people in our community to have a good command of the Bengali language. As much as I believe it is fundamental that we preserve and have the agency to exercise our ethnic languages, we must also be willing to excel in the language in which official work is carried out. If we don’t, members of our ethnic and marginalized communities will continue to lag behind in many areas.

This idea was originally propagated by Dr BR Ambedkar when he chose to write Annihilation of Caste in English, not the language of Dalit communities. Dr. Ambedkar had an incredible reason for this. He mentioned that if the upper class people of the Indian subcontinent contained the words of his book, the debate the text sparked would not have reached world leaders. Its impact would not have been as great if it had been limited to a local language.

Pursuing this idea, many Dalit activists today have set up projects that teach English to marginalized people. In one of her latest collections of essays titled Azadi, Indian Author and Social Activist, Arundhati Roy explains how she was often treated hostilely for choosing not to write in one of the Indian languages. She reveals how she was bombarded with questions and accused of spreading anti-national sentiments for writing in English. Quoting a Dalit activist, Roy writes that the English language is used as a tool “to climb the ladder and become free forever”.

Krishti Aung Leona is a graduate student in English Literature at the Liberal Arts University of Bangladesh. She can be contacted at [email protected] or her Instagram @krishtiaung.

2022-02-23
Previous Post: Why the English National is the stuff of champions
Next Post: Apple will add fifth US English Siri voice support for iOS 15.4