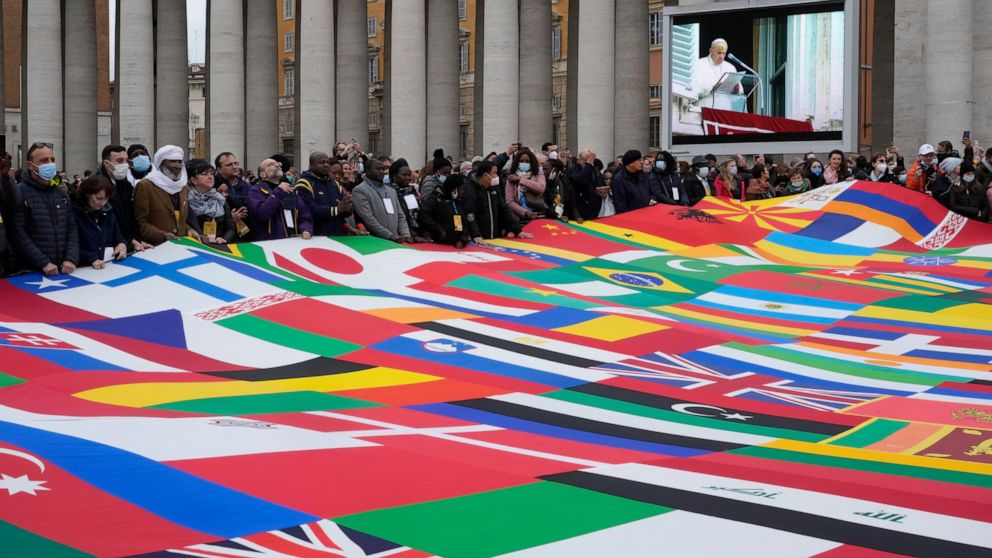 Pope Francis on Sunday expressed his pain and sadness over the death and suffering of migrants crossing the English Channel, on the Polish-Belarusian border and in the Mediterranean Sea

VATICAN CITY — Pope Francis on Sunday expressed his pain and sadness over the death and suffering of migrants crossing the English Channel, on the Polish-Belarusian border and in the Mediterranean Sea.

The pope asked the faithful gathered in St. Peter’s Square for the traditional Sunday blessing to pray “for migrants and their suffering”. Among those present were members of a migrant association he had met the day before at the Vatican, who were holding a huge banner made up of flags from countries around the world.

“How many migrants, let’s think about it, how many migrants are exposed to very serious dangers also in recent days? How many lose their lives at our borders? “said the pontiff.

“I feel pain at the announcement of the situation in which many find themselves. Of those who died in the English Channel, of those on the border of Belarus, many of whom are children. Those who drown in the Mediterranean. What sorrow thinking of them.

The deaths of 27 migrants in the English Channel shocked Britain and France. Yet shipwrecks of this magnitude are not uncommon further south in the Mediterranean Sea as migrants flee poverty, natural disasters and authoritarian regimes for a better life in Europe. UN officials estimate that up to 1,600 people are dead or missing in the Mediterranean this year alone, their bodies generally not found and their deaths reported only by survivors.

On Sunday night, the Italian coastguard rescued 244 migrants off Calabria, the tip of Italy’s boot, in difficult sea conditions. Among those rescued were 41 minors, including a baby born on the crowded wooden fishing boat on Saturday.

The sovereign pontiff also remembered the migrants who are returned from Europe to North Africa, “where they are captured by traffickers and reduced to slavery. They sell women and torture men.

Francis expressed his closeness to migrants and called on civil and military institutions to find solutions to help those who undertake dangerous journeys “that respect the humanity of these people”.