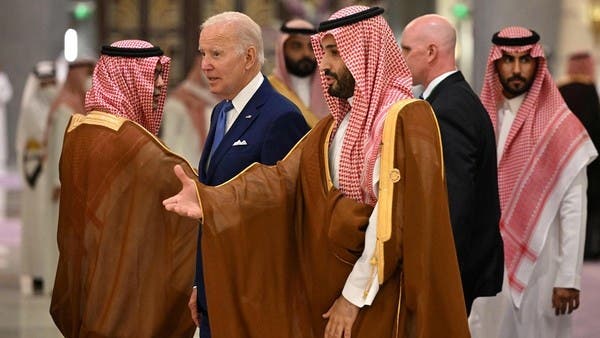 Military agreements between Riyadh and Washington

Whatever the occasion, the popular media is always on the lookout for scoops and sensational stories. A few years ago, the photo of former President Donald Trump, King Salman bin Abdulaziz and Egyptian President Abdel Fattah al-Sisi placing their hands on an orb to mark the inauguration of a certain center became the news, instead of the actual opening of the Global Center for Countering Extremist Ideology. Likewise, President Obama’s curtsey to receive an honorary necklace made headlines, as did the handshake between the late King Abdullah bin Abdulaziz and former President George W. Bush, not to mention the incidents of Biden stumbling down the stairs or falling off his bike. And now comes the turn of Biden’s punch with the Saudi Crown Prince when the latter greeted him at the door of the Royal Palace, which some in Washington were quick to decry, writing, “Why didn’t he- he not saluted on the tarmac?!”

But to follow and evaluate such meetings, it is not the scoops of the press that count. What matters here are the agreements reached between the two countries and the political summit that brought together the leaders of the GCC states, Egypt, Jordan and Iraq, as well as Biden.

With the exception of such strategic arrangements which may have been agreed upon but not announced, the official statements issued following the meetings constitute, in themselves, a significant development of bilateral relations and cooperation. In my opinion, the key aspect is the return of the United States to military cooperation with Saudi Arabia. In fact, it’s safe to say that the United States yesterday rekindled its strategic relationship with Riyadh, which had faltered significantly during nearly a decade of stalemate since the presidency of former President Barack Obama, who then chose to reduce cooperation with Saudi Arabia and Arab countries and negotiate with Iran. Then, during President Trump’s tenure, Congress halted aspects of military agreements and cooperation with Riyadh.

During their meeting on Friday, Prince Mohammed bin Salman and President Biden agreed that the United States and other peacekeepers and observers would leave the Saudi island of Tiran, located at the mouth of the Gulf of Aqaba, by the end of the year. This came at the request of Riyadh to transform Tiran from a military base into an economic base now that Egypt has ceded its sovereignty over the island. Saudi Arabia, on the other hand, would exercise its sovereign authority in this strategic region, overseeing the international maritime routes that allow the passage of ships, including Israelis, as well as Israeli planes crossing Saudi airspace, in the same way. way than other regional waterways and airspaces. , as announced two years ago.

More important are the agreements reached by the two governments on military and security issues, with Washington announcing the return of military cooperation and military sales, including advanced technical and military defense systems. Washington has also pledged to cooperate with the Kingdom to build a system to counter peace-threatening drones and ballistic missiles, i.e. those launched by Iran and its militias in the region, which he didn’t explicitly name it.

According to the officially announced results, the meeting also agreed to establish a combined task force in the Red Sea and another joint task force led by Saudi Arabia in the Gulf of Oman and the North Arabian Sea. It was also agreed that Saudi forces would work with the US Fifth Fleet to take advantage of modern technologies such as unmanned vessels and artificial intelligence to protect the maritime domain.

In terms of telecommunications technology, bearing in mind that Saudi Arabia has started using Chinese 5G technology, we noted in yesterday’s meeting results announcement that the United States had signed a memorandum of understanding to cooperate to link Saudi and American technology companies to deploy 5G and 6G. technologies, as well as other high-value agreements in the fields of trade cooperation, investment, health and law.

This article was originally published and translated in the pan-Arab daily Asharq al-Awsat.

Disclaimer:
The opinions expressed by the authors in this section are their own and do not reflect the views of Al Arabiya English.