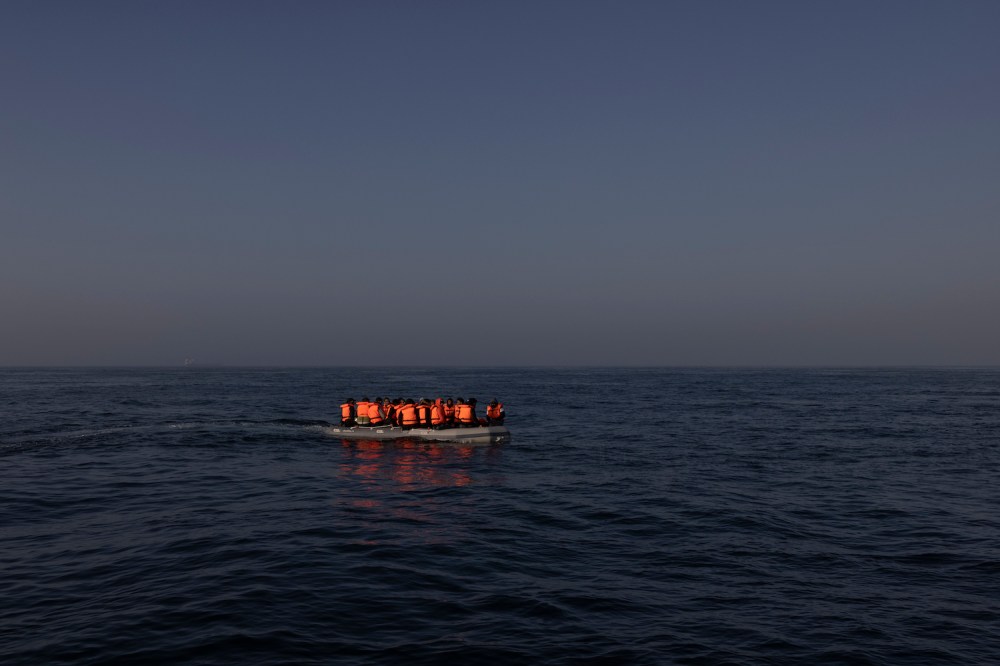 On November 24, an inflatable boat collapsed under the weight of more than two dozen men, women and children capsized in the choppy waters of the English Channel. At least 27 of the passengers, mostly Kurdish migrants seeking to reach England from France, drowned.

It did not take long for British and French audiences to forget this event. As for their politicians, if they are unanimous in recognizing the event as a tragedy, they remain less certain of remedying it. With eyes firmly fixed on their own bases, British Prime Minister Boris Johnson and French President Emmanuel Macron continue to point fingers at each other.

Yet this discord between British and French leaders goes beyond domestic political imperatives. It also reflects what their great tragic playwrights, William Shakespeare and Jean Racine, already understood: tragedy occurs when characters are driven by forces, internal and external, that they cannot control.

On November 24, an inflatable boat collapsed under the weight of more than two dozen men, women and children capsized in the choppy waters of the English Channel. At least 27 of the passengers, mostly Kurdish migrants seeking to reach England from France, drowned.

It did not take long for British and French audiences to forget this event. As for their politicians, if they are unanimous in recognizing the event as a tragedy, they remain less certain of remedying it. With eyes firmly fixed on their own bases, British Prime Minister Boris Johnson and French President Emmanuel Macron continue to point fingers at each other.

Yet this discord between British and French leaders goes beyond domestic political imperatives. It also reflects what their great tragic playwrights, William Shakespeare and Jean Racine, already understood: tragedy occurs when characters are driven by forces, internal and external, that they cannot control.

As with classic French tragedy, last month’s catastrophe unfolds in five acts. The first act dates back to 1938, when the combination of Nazi Germany’s annexation of Austria and the orchestration of Kristallnacht caused a massive influx of refugees across France’s borders. Long considered a refuge for refugees, France had become, by the end of the decade, a hell for asylum seekers.

In response to the demands of the Third Reich, as well as deepening xenophobic sentiment in the country, the centrist government of then French Prime Minister Édouard Daladier repudiated the Republican tradition of welcoming immigrants. New refugees were turned back, while many already in France were expelled from the country or, like Arthur Koestler and Hannah Arendt, returned to newly built detention camps. (Koestler described his experience in the aptly titled The Scum of the Earth, while Arendt maliciously observed in his article “We Refugees” that history had forged a new type of human being: “one who is put in concentration camps by his enemies and in internment camps by his friends”.)

With the fall of the Third Republic and the advent of the Vichy regime in 1940, the anti-immigration policy took another turn. When the influx of refugees fleeing Germany stopped, the Vichy government turned to those who had arrived much earlier and obtained citizenship. Along with its battery of anti-Semitic laws that effectively turned French Jews into second-class citizens, the government assumed the power to strip citizenship from anyone granted to it after 1927. With regard to immigrants, French republicanism and French authoritarianism could be just as ruthless.

At the end of the century, the port city of Calais is the scene of the second act. Growing numbers of refugees from war-torn Kosovo, along with equally desperate Kurds and Afghans, have flocked west in hopes of obtaining asylum in France or Britain. As a busy terminal for ferry and train traffic – the Eurotunnel opened in 1994 – Calais proved an irresistible magnet for refugees. In 1999, responding to pressure from asylum seekers, the French government and the Red Cross turned an empty warehouse in the nearby town of Sangatte into a refugee center.

In 2002, the centre, designed to accommodate 600 refugees, was staggering under the weight of more than 2,000 men, women and children. But that, critics say, was also intentional. As in 1938, the French Republic again made a sudden about-face in terms of immigration policy. In the early 1980s, humanitarian pressure in French immigration policy dominated, the government granting asylum to around 80% of the approximately 20,000 applicants. In 1999, however, the numbers were reversed: 80% of some 30,000 applications were rejected.

Unable to go legally to Great Britain, rejected refugees cannot legally stay in France. At the same time, they were increasingly unable to tolerate the squalid conditions of Sangatte. As Deputy Mayor of Calais thereafter affirmed, local officials were determined to maintain a “certain level of pressure” on the refugees. “We want them to send back the message that there is no point in coming to Calais,” he said. As a result, refugees increasingly took the dangerous route through the Eurotunnel. In 2002, then French Interior Minister Nicolas Sarkozy, under increasing pressure from Britain, announced that the center in Sangatte would be closed. The goal, he declared, was to “end a symbol of the illegal magnet effect in the world”.

When the curtain rose on the third act, everything and nothing had changed. Sangatte had been closed for a year, but as for the flow of refugees from the East, not that much. At the 2003 Franco-British summit in Le Touquet, a seaside resort until then known as PG Wodehouse’s pre-war tax haven, the two governments signed a series of agreements. Although largely ignored at the time, the immigration deal proved the most fateful. As Britain is not a visa-free member of the Schengen area, the Labor government of then British Prime Minister Tony Blair demanded new measures to stem the cross-Channel smuggling of illegal immigrants. France’s Gaullist president at the time, Jacques Chirac, agreed to set up “juxtaposed national control offices”: a clumsy name for a clumsy arrangement. British and French immigration officers would carry out their duties at each other’s entry points.

Indeed, by regaining a foothold on a thin slice of land they had lost during the Hundred Years’ War in Calais, the British agreed to foot the bill for the costs France would incur by stepping up its anti-immigration efforts.

As the fourth act of this tragedy revealed, the agreement underwent several modifications in the following years to respond to the changing, ie worsening, situation of the refugees. The tourniquet applied at Le Touquet to illegal immigration has led to a haemorrhage, not to a healing of the humanitarian crisis. While the origin of the refugees changed – there were now increasing numbers from Eritrea, Somalia and Sudan – the reasons for their flight did not: chronic warfare and dire conditions.

Over the next decade, a camp of several thousand refugees – dubbed “the jungle” – took root on the outskirts of Calais. These roots were torn out on several occasions by the police, who periodically entered the camp with dogs and tear gas, destroying the makeshift tents and dispersing the battered inhabitants. Each time, however, the refugees returned to the area within weeks to rebuild their shelters. In 2016, as the level of crimes committed both against and by refugees rose and pressure from Britain mounted, the socialist government of French President François Hollande once again dismantled the jungle, redistributing its inhabitants into shelters located across France.

Yet their place was soon taken by more recently arrived refugees, also attracted by the proximity of the Calais camp to the white cliffs of Dover. In 2017, representatives of the French Defender of Rights, an independent agency created in 2008 by a constitutional revision and responsible for guaranteeing human rights, visited the camp. Dismayed by the material and sanitary conditions of the camp – absence of shelters and children sleeping on the ground – and by the persistent violence on the part of the inhabitants, the committee reported that “violations of fundamental rights [were] of exceptional and unprecedented gravity.

Yet Macron’s centrist government has failed to respond to the report in any substantive way. The beaten agreements of Le Touquet had been broken by Brexit, which meant that France was locked into an asymmetrical relationship with a non-EU state. Additionally, Macron was concerned about the 2022 presidential and legislative elections. Instead of addressing the report head-on, Macron shifted his stance on immigration to the right. Following the US withdrawal from Afghanistan, he gave a televised speech, to declare, “We must anticipate and protect ourselves against large irregular migratory flows.” At the same time, a presidential adviser confessed at The Express, in the background, that “the level of tolerance towards immigration in our country continues to decline”. Clearly, Macron has concluded that if he wishes to lead, he has no choice but to follow.

The sinking of the inflatable boats filled with human beings, coupled with the sinking of the public’s will to welcome these same human beings, brings us into the fifth and final act of the tragedy. Among the migrants who drowned that night on the English Channel were a Kurdish mother, Khazal Ahmed, and her three children. Interviewed by a reporter at an encampment a week before she and her family died, Ahmed was asked if she was scared to cross the English Channel. “Of course I am”, Ahmed responded, as she warmed her hands over a makeshift fire. “But look how we live,” she added. “We cannot stay here.

In the end, they could no more stay on that side of the Channel than they could reach the other side. In one interview with a Kurdish media site, Rudaw, one of the two dinghy survivors said the migrants called French authorities when the dinghy’s pump broke down. “They said, ‘You’re in British waters,’ then said to call the British. When the migrants did, the British authorities, stating that the dinghy was in French waters, replied that the migrants should call their French opposites. By the time the ships arrived on the scene, the curtain had already fallen on this particular tragedy. As long as these governments refuse to rewrite their roles, similar tragedies will continue to race across the Channel water scene.

2021-12-12
Previous Post: Body found entangled in the nets of a fishing boat in the English Channel | World | News
Next Post: Coastguards and Border Forces called out to Channel incidents