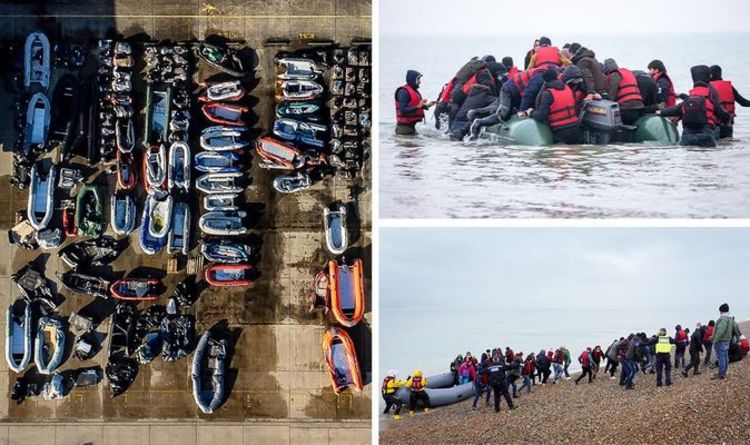 The footage, captured by an authorized Daily Express drone last week, shows rows and rows of tiny boats in a facility next to a warehouse in Dover, Kent. They are thought to have been used on the English Channel by migrants fleeing persecution from abroad, which often occurs with the help of criminal gangs.

The Home Office warned it was “prosecuting those responsible for facilitating crossings” and advised those fleeing countries to “seek refuge in the first safe country they reach”.

But the new photos show the scale of the often deadly activity. In a single image, four rows each of around 15 assorted inflatable boats are seen within the fenced enclosure.

A record number of people moved to the UK in 2021.

At least 44 people died or disappeared during the attempts.

Migrants are crammed into boats on each of these journeys. Last summer, a ship had 83 people on board.

According to reports, inflatable boats were held together with duct tape and migrants used rubber rings or inner tubes from bicycle tires rather than life jackets.

Claire Millot de Salam, a migrant protection NGO, said there were fewer working blocks for asylum seekers in the UK.

She said last year there were ‘no identity papers in England’ which could lead people into ‘undeclared work’.

Other countries that people may pass through, such as France, Germany, or Italy, require government-issued ID cards.

Evidence of their trips to the UK is collected by the Home Office, he says, in the form of securing their ships.

Home Office bosses told Express.co.uk the boats are being recovered and safely secured at a site as part of its investigations. They have not, however, confirmed the location of this complex.

There is, however, still some frustration in the Interior Ministry over French policies.

French authorities will not intercept migrants who resist rescue, but the UK has a different interpretation of the law.

Speaking to Express.co.uk, a Home Office spokesperson said: “People fleeing persecution should seek refuge in the first safe country they reach and not risk their lives paying criminal gangs to make the dangerous journey across the English Channel to the UK.

“We are prosecuting those responsible for facilitating the crossings and, as part of the investigations, the recovered boats are safely stored for use as evidence.

“The Nationality and Borders Bill will reform our approach and fix the broken system, including making it a criminal offense to arrive in the UK illegally and introducing a maximum life sentence for those who facilitate the illegal entry so we can truly break the business model of heinous criminals profiting from deadly crossings.”