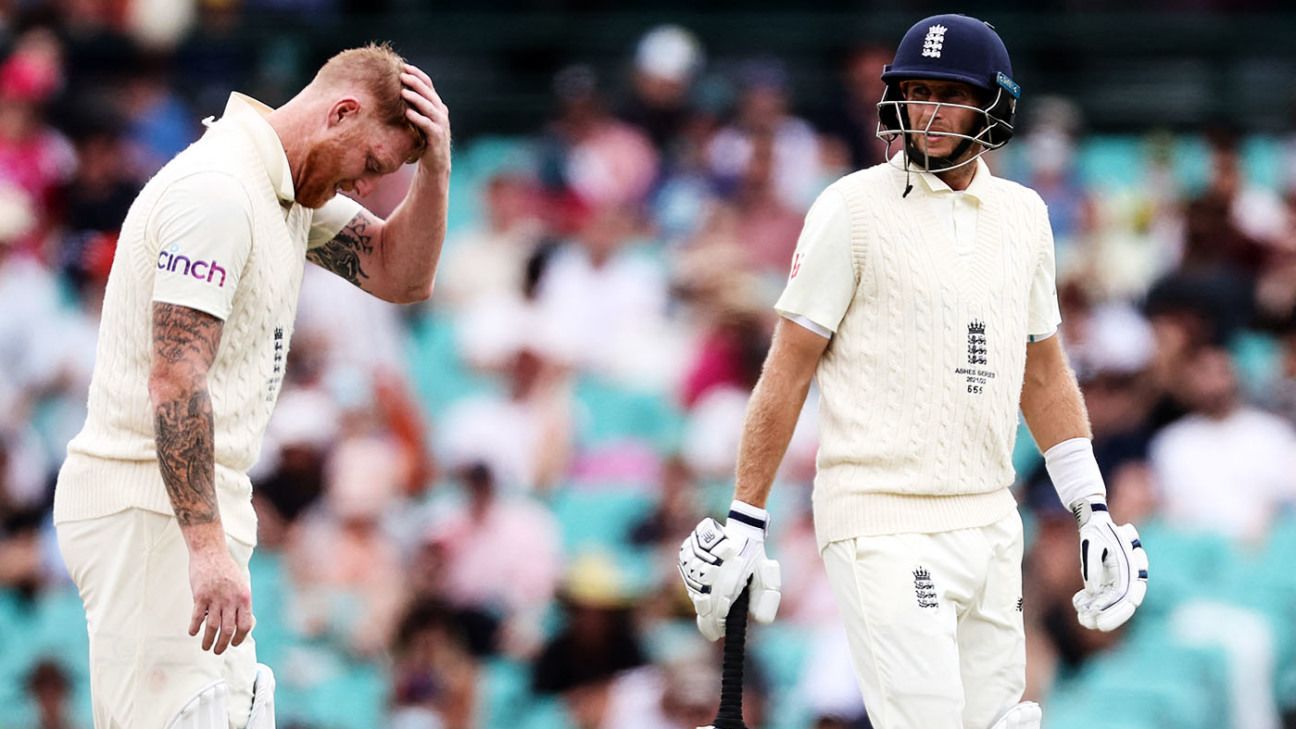 By: Vincent L. Mitchell
In: English story
The Joe Root news made me cringe. He’s such a good guy and one of the few real big hitters in England. He gave this chalice of himself, achieved notable success as England’s longest-serving captain, and won hearts.

The overwhelming outward view that his numbers were on the rise would have weighed heavily on a man of rare integrity. He saw leading England as a privilege for which he was always grateful, and it is in his own measure that he sees himself continuing in the mission of carrying the team forward, even with someone else in bar.

This is all too bad but probably fair. Curiously, his captain lacked the intelligence of his vice-captain. In the days before Responsibility stopped on his doorstep – when he acted as Alastair Cook’s tactical conscience – he was everywhere, a cornucopia of imagination and ideas. But the work has exhausted his creative forces: a sacrifice on the altar of practicality if there ever was one. It’s worth remembering that he led the Test team through the pandemic, when his side played so much more cricket than any other. He is a humble, hard-working and solid man who, in recent times, has found himself at the head of a dysfunctional team. Above him there has been a power vacuum, below him an alarming drop in standards. It will be difficult to follow. After all, as the song goes “…you don’t know what you got until it’s gone”.

So where are we with English cricket?

Clearly, the men’s national test match team needs work. Apparently, Andrew Strauss, the interim chief executive of English cricket, is unwilling to stay in the role for longer than the next few weeks. His only exit strategy may be nominating Ashley Giles’ successor, so the hope is that the candidates possess some of the qualities that Strauss himself brought to the job when he first took it there. is seven years old. English papers suggest Rob Key has it in the bag as much as anything due to a surprising lack of candidates. Opting for the only option is a worse idea than opting for the right option. Key knows County cricket like the back of his hand, and his incisive commentary on Sky is accompanied by care and passion. These are good starting points in finding the right person; the devil will be in the specification detail. Or will he be able to write his own screenplay?

Eoin Morgan as a coach? Not the worst idea in the world•Matthew Lewis/ICC/Getty Images

Before all that, however, comes the appointment of the new chairman of the England and Wales Cricket Board. Or he should but probably won’t. Ideally, this new president would like to have his fingerprint on each of the five pending appointments at the top of the English game. More of that role in a minute.
In a few months, Tom Harrison will have moved on, so there is a managing director to be found soon enough. It is said that the new MD will be appointed in time to name the coaches and captains of the men’s national teams for the race to the international summer. The presidency is not expected to be ratified and announced until May 17, leaving just a fortnight before the draw with Kane Williamson at Lord’s. There’s more to do than is possible, so we have to assume there’s already a lot going on behind the scenes.
Who are the possible Root replacements? Ben Stokes, sure, but that last year of his life wasn’t one that set the benchmarks for a complicated, often overwhelming role. And anyway, he may not be fit enough to start the season. James Vince maybe, but he’s not even on the team – which doesn’t mean he shouldn’t be. Neither does Rory Burns, although the Surrey captain has something appealing about the way he plays. Considering those not in the squad, could Moeen Ali be tempted to step back into the fold of Test Match cricket if the captaincy was the bait? Jimmy Anderson or Stuart Broad? Probably not, given that they broke ranks in Australia with hard-hitting comments about those around them. After all, this is the age of the snowflake generation. You can’t imagine Fred Trueman or Sir Ian Botham held back in their dressing room days.

There is obviously no one else in the running.

What about the Test team coach? This is obvious to this observer. Gary Kirsten stands out: a man with exactly the strength of character, breadth of personality, depth of knowledge and understated approach that England players need today. He managed the Indian and South African teams with a tough mind and the softest gloves, while bringing success and warmth to both. A release clause in his contract with the Gujarat Lions would allow him to jump on the plane. That and a big check, one imagines.

The question of the white ball is not easier. My view is that Eoin Morgan should play and take charge of both teams immediately, but he might not agree! Paul Collingwood is a populist choice and Mahela Jayawardene a fascinating thought. Jayawardene has a myriad of business interests, a few hands-on franchise positions, is a consultant coach to the Sri Lankan team, and holds a board or advisory position with the Sri Lankan Sports Commission. It’s a lot to give up. Certainly more than Collingwood.

You’d think the boss – the president – would be able to create the perfect date line, but they’ll come when they come, really by default, so let’s hope they freeze. Each of them must sign a charter that guarantees that the game evolves from the bottom up.

Recreational cricket is essential, and projects such as the ECB’s Inspiring Generations and the more standalone Chance to Shine are doing a remarkable job of turning the wheel of development. But the lanes are a mess and the best proof of that is the relatively small number of England players who have come out of the state-funded school system over the past 20 or so years. Equality, diversity and inclusion are not to be taken lightly. Much has been done, but it is clear that much has not been enough. It is staggering that marginalized communities have missed the game in ways that are now so apparent and previously so hidden. Cricket must, quite simply, give these communities and their diminishing interest a greater sense of belonging.

Counties are best placed to achieve this and can do much more to become 18 effective and ambitious academies for the game. This would then free up Loughborough to become the tight elite finishing school it was meant to be in first place. The 18 county footprint should remain, that would be reasonable, but there is a need for another small first-class tier to improve the level of cricket that powers the Test match arena. It’s a magnificent thing that Darren Stevens is still turning it on for Kent at the age of 46. In fact, he’s a pillar of the kind of community collective that makes the county game so valuable. But he is of no use to the England team and therein lies the rub. The new president has the daunting task of bringing the game together, and issues like this are some of the most confusing and challenging.

Is Rob Key a shoo-in for GM?•Andrew Matthews/PA Photos/Getty Images

Those in power speak of being “a critical moment”, which, among other things, must refer to the painful exposure to the Ministry of Digital, Culture, Media and Sport last year, and the battle of mind going on between the independent board, the counties and the various other stakeholders. A corollary of this has been a focus on the business necessities of process and governance to pave the way for better days. A business as big as English cricket (£300m in turnover last year and a 10% bigger budget this year) needs to be tight and well run, but the points of difference – aspiration, inspiration, collective commitment, clarity of thought, creativity – come from the quality and talents of the people who work there and lead it. An orchestra has a myriad of talents but the conductor brings them together to move the dial. How many great conductors are there?

Ideally, the chairman should have a vision for cricket that fully motivates his desire to hold the position. There must be something modernizing about this person – more a passionate reformer than a revolutionary activist – whose firm and convincing hand must be accompanied by a deep understanding of cricket’s place in our country’s history. The game in England calls for the kind of innovative, credible and motivating leadership that gives everyone working from the inside and looking from the outside a spring in their step. We are all tired of reading what is wrong; there’s too much to love for it to last so long.

Without selling the soul of our game, we need to invest in its growth – women’s cricket, first-class cricket, a broader remit for counties, with specific reference and responsibility to prioritize pathways for young talent , Chance to Shine, the South Asia Action Plan, the Hundred, and more – but all that money can’t come from TV and other media rights. There are different ways, the most exciting of which is private investment, but the time is short and the market limited. English cricket stopped before – think of the early days of T20 cricket – and paid for the delay. It is time for activation and mobilization; this is not the time to procrastinate. From now on, it’s about identifying dynamic and intelligent leadership styles in each of the vacant positions.

The most immediate thing the many disparate parts of English cricket can do now is come together as a united front and fight for the game’s place in the modern world. Every President, Board Member, CEO and CFO, Marketing Guru, Executive, Coach, Captain, Player, Ground Staff and Development Officer must play their part. It is too easy to blame the England team and its captain, and it is very difficult to run a national sport from top to bottom. Cricket is a game that requires love at its core: down to the smallest muscle.

Mark Nicholas, the former Hampshire captain, is a television and radio presenter and commentator