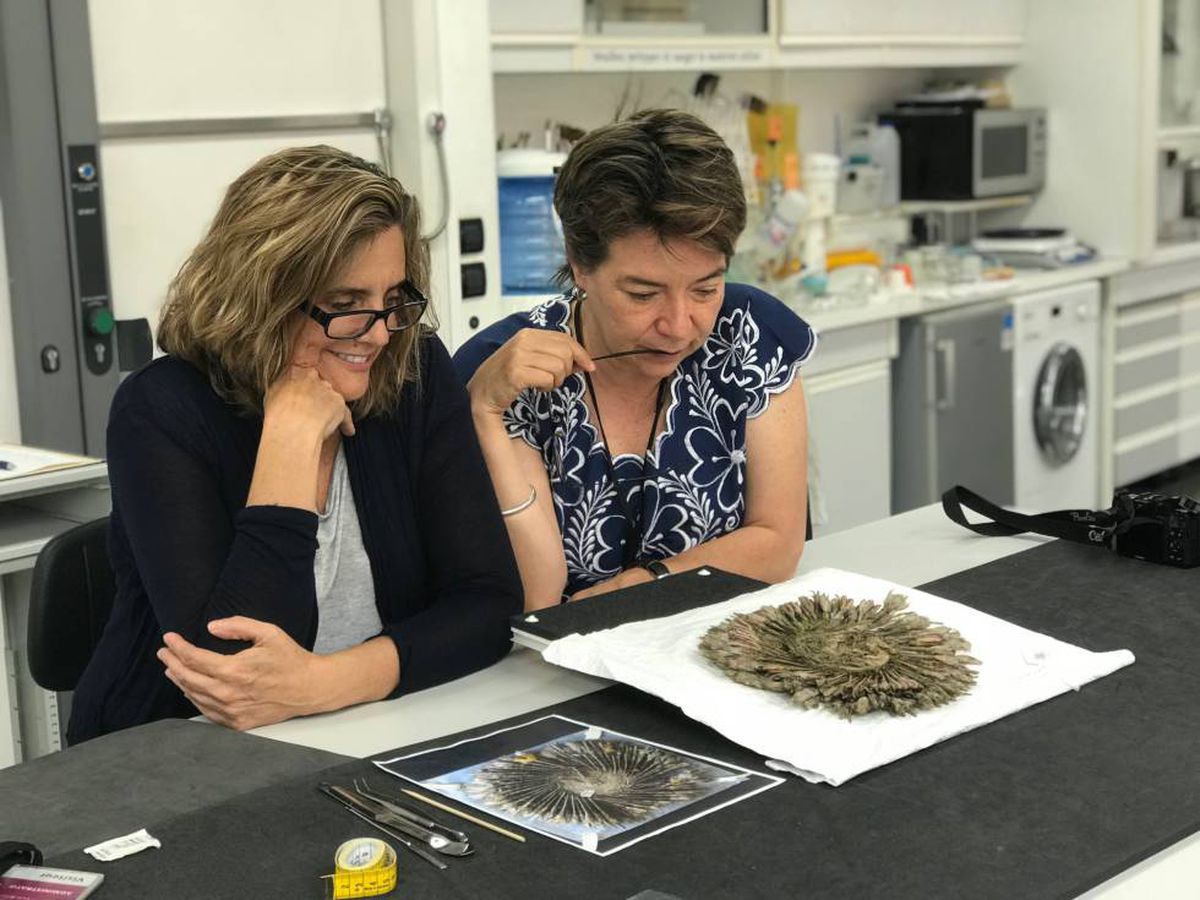 The Metropolitan Museum in New York has in its collection more than 6,000 objects created centuries ago in the territory currently occupied by America. They include Olmec vessels, jade masks, Aztec stone carvings, Peruvian textiles or Taino shell figures which, together with artifacts from Africa and Oceania, share the [space of the] Michael C. Rockefeller Gallery of the Met, opened to the public in 1982. After 40 years, the private institution has begun a remodeling of the space, “a complete conceptual and physical overhaul” which will be completed in November 2024. The team includes Mexican researcher Laura Filloy, PhD in archeology from the University of Paris, has been appointed associate curator of the collection of pre-Hispanic objects. “The challenge is to find a separate space in the Art Museum of the Americas,” she explains from New York, where she moved/settled in February.

Filloy (Mexico, 55) notes that the American collection will have “a new discursive space” in the 40,000 square foot room overlooking Central Park. “Dr. Joanne Pillsbury, who is an expert in the art of South America, and I, who come to complete the part of Central America to the north, will invite a dialogue that gives voice to all these objects, which have a cultural weight of more than 4,000 years,” says Filloy, who will be the first Mexican to hold this position at the American museum. During her years as a curator, Filloy was particularly interested in the life stories of artifacts millennia: she studied pieces such as the chimalli, a shield made of leather and feathers kept at the Museum of Mexican History. “The most important thing”, she says, “is to try to give voice to these artists of the past and bring them into the present.”

QUESTION. How do archaeological pieces fit into an art museum?

TO RESPOND. Well, you have to try to understand them precisely within the framework of what an artistic production is, a materialization of the creativity and ideas behind an object. These days, through these objects, we know more about the history of the peoples who lived on this continent. We have deepened, for example, our knowledge of Mayan writing and we know more about this artistic production through the voice of its creators.

Although not all cultures have signed their works, there are works that are signed. For example, in Mayan art, the creators show intentionality, to delimit a space of creation and to say “it is we who did that”.

Q What is the biggest challenge of this new position?

A. One of the challenges is trying to find a place for art from the Americas in the museum. Since the creation of the Metropolitan, the collections of the Americas have not found their place in the world of universal artistic creation. This is because of the history of art itself, and locating art from Mexico has always been complex. Many objects were included in the sculpture collection, then moved on to Renaissance art, post-Renaissance art, and even decorative arts. That is to say, they were not marked out as the artistic production of a region and several cultures.

The renovation of the exhibition halls will create this space. On the one hand, it will be in a very important part of the museum: the Michael C. Rockefeller Gallery is very large and overlooks Central Park. The objects of the Americas will be in this area, where there is a lot of natural light, which will allow us to see the pieces in a different way. Traditionally, objects are placed in enclosed spaces with little light or where it is not possible to see the qualities of the materials and how they were made. The continent will be in discussion, but each of the cultures will speak for itself. And, according to the tradition of the arrival of objects in the museum, also with art from Africa and art from Oceania. But not mixed.

Q How did they get to the museum?

A. The Metropolitan’s collections are framed by a 19th-century interest in American art and production, and an attempt to appreciate connections to other artistic traditions around the world. Generally speaking, these American objects were of more interest to anthropologists, archaeologists, and even geologists. Indeed, typically, American collections were found in natural history museums. The Met took an early interest in exploring the characteristics of these objects as artistic creations, seeing their innovation and creativity. That is to say, by recognizing the people behind these objects and by positioning American art in the universal language of art.

Q Two centuries ago, museums were considered “chambers of wonder”. What is the role of a museum like the Met today?

A. Museums are for the public. And their duty is to transmit advances in knowledge in different ways, whatever their point of view. Ultimately, we are all dedicated to the study of human production. It is very important for me to try to bring the museum closer to the greatest diversity of audiences, not just the educated public.

I would like to try to reach communities that don’t usually go to art museums. Sometimes art museums intimidate us, we are more likely to go to a natural history museum.

Q As part of the space transformation, will there also be a review of the narrative and concept [of the collection]?

A. Absoutely. The collection has been revised over the past 40 years and not only that, there has been a substantial advance in the field of pre-Hispanic studies around the world. The idea is to take what we know of the collection and enrich it according to advances in the study of the history of art, archaeology, anthropology and materials. . In addition, expert colleagues from different cultural areas were also asked to get involved in ideas on how to better tell these objects in the specific context of artistic production and try to find a dialogue between these pieces.

Q What would your contribution be?

A. I like to tell stories and try to get the audience to not only see an artifact, but the object to move something within them, which makes them think beyond the form or the material, and see the object as a container of ideas. Another fascinating thing is to see the materiality of objects and to understand it from the point of view of the artist, [such as] why they chose certain types of materials. It may be because he allowed them to do this or that type of work, but these subjects are also loaded with meaning. For example, I would like us to appreciate the transparency of green gems: we think that jades are dense stones, but no, if we see them under another type of light we can perceive this transparency, these green colors which were linked to important concepts for the Maya. I have always been interested in sharing the life stories of objects, meaning understanding them in the context of why, how and by whom they were created, and what their history was.

Q It is difficult to determine the origin of the pieces that came centuries ago from the territory where they were created.

A. Yes, the progress made in the study of the styles, techniques and materials of these objects makes it possible to contextualize them and to situate them in a temporality and a geography. At the Metropolitan Museum there is a large scientific team that supports this part of the investigation and there are also archives that account for this later history of the objects and which allow us to trace a large part of their history.

Q In different countries, there is a debate about the return of archaeological pieces to the countries that claim them. Recently, France sent a consignment [back] in Benin, for example, and in January, two Mexicans inserted fake audio guides [in the museum in Vienna] to open the debate in Austria on the relocation of Moctezuma’s headdress. What is your position on the restitution of archaeological pieces kept by museums?

A. It’s complicated because I’ve just arrived at the museum. I do not yet have all the tools to be able to give an answer from my current position. What I can say is that museums are spaces for conservation, dialogue and the transmission of knowledge, and that is what we must promote. Now there will be other things to consider, and I think Alisa LaGamma can give a better answer, because she’s the curator of the [Met’s] African collections and she has been involved in this type of initiative.

Q Does this debate take place inside the museum?

A. It is difficult for me to answer. But there is [certainly] sensitivity within the museum. Alisa LaGamma, Africa Curator, was born in Africa, and Maia Nuku is the Oceania Curator and her ancestry is Maori, and now Joanna Pillsbury and I are adding the American side to this department. It is about giving a voice to the communities of origin. There are experiences, but I can’t talk about them because I haven’t known them. But Oceania and Africa have been implicated in this discourse that is taking place around the world.

Q In Mexico, the government insists that efforts be made to bring the parts back from abroad.

A. I am not very involved in the political aspects of this affair. In Mexico we have incredible museums, we have wonderful collections, we have a vast cultural heritage and we should be concerned about having the resources to study this heritage, learn about it, promulgate it and return it not only local, but also global. Traveling inside the territory, going to the other side and knowing what the other is doing is important, and if we have the opportunity to travel beyond the borders and see another type of human production , it’s incredible, it makes you understand a lot of things about how the world works.

Q Apart from this, the national union of restorers of the National Institute of Anthropology and History (INAH) has been calling for improvements for months. You have actively supported this request. How do budget cuts jeopardize heritage?

A. We can think of it as the opposite: we should look for a way to have a budget so that we can continue to study, conserve, enhance and protect cultural heritage. Of course, this would not only be a direct budget for conservation, but also for the study and dissemination [of objects and knowledge]. In the absence of resources, it is obviously difficult to carry out the tasks required for this great field of protection and study of cultural heritage. One would expect more budget for culture and education to be a global trend. I believe it would make us better as human beings.