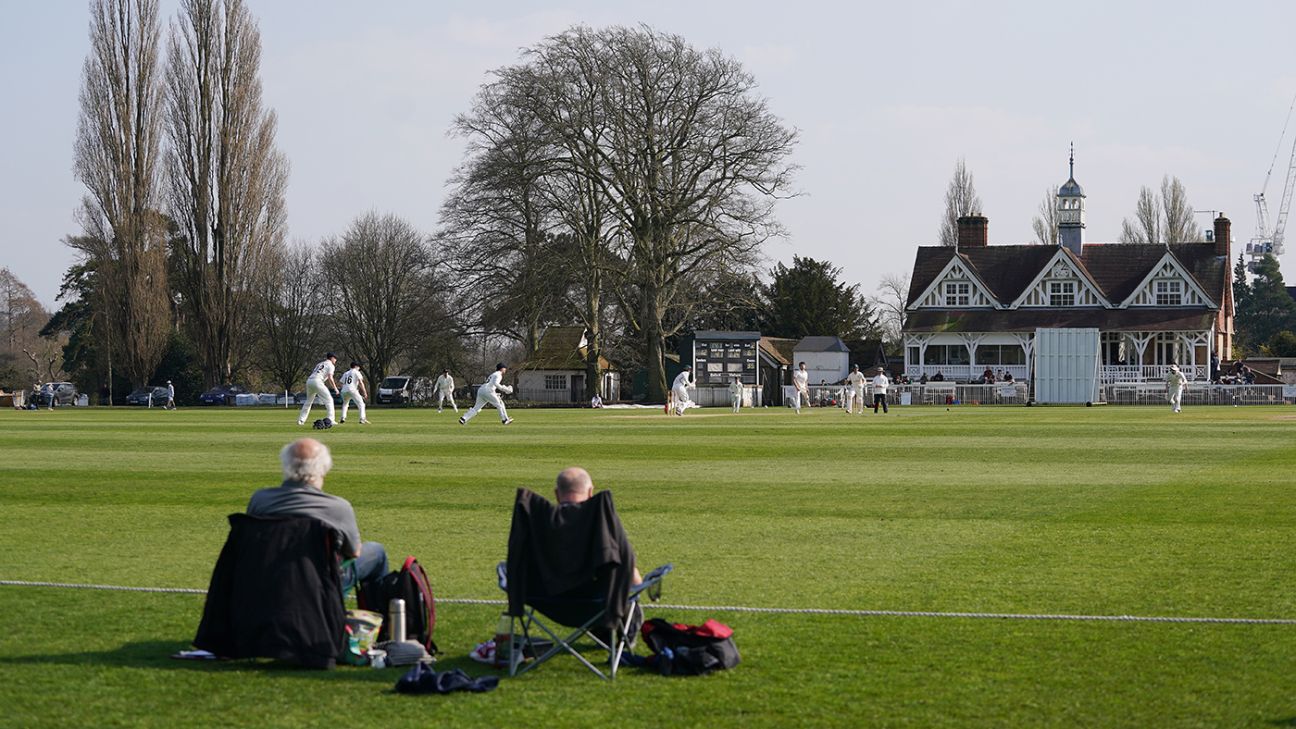 “Take thermals to the parks,” Scyld Berry said when briefed on my plans. It was, of course, sound advice, of the kind one would expect from a former editor of Wisden Cricketers Almanac. I anticipated a cutting wind and estimated that my heaviest flannel shirt would only be one of the four layers I would need. Around the border fanatics would declare they hadn’t missed day one cricket at this ground since Vic Marks was up and they were damned if a bit of frost was going to stop them now. The fielders wore bobble hats and prayed the ball wouldn’t come their way. The jokes included the prospect of double pneumonia. The whole shebang was first cousin to the inevitable. For what kind of loonie plans to cover a cricket match before the clocks have gone forward?

But the only madness is my assumption. As Worcestershire players and coaches watch Gareth Roderick tuck Hugo Whitlock’s first ball of the game behind the square for a single, no one wears anything more protective than a sweater or tracksuit top; almost none are hypnotized by their mobile phone. “One on one!” Brett D’Oliveira exclaimed he had won the toss and the new visitors’ skipper then rushed to move the aiming screen. The temperature should be in the low sixties. Already some of the daffodils on Balliol’s rear quad are passing and the magnolias in the parks are rioting. The Crepes O Mania van does a good business, though nothing beats the kill it will make during the afternoon session. No one has experienced such a walk in Oxford. My binoculars collapse during the first hour of play; maybe they can’t believe their lenses.

Roderick and Taylor Cornall, Worcestershire’s almost new signing from Lancashire, went 114 from 27.3 overs for the first wicket before Roderick tossed Toby Greatwood to Karan Parmar at midwicket. Lunch is taken nine bullets later. The morning play was attended by around 100 spectators. The most conservative occupy the benches, one of which bears the name of Martin Donnelly, the New Zealand left-hander whose staff emptied the lecture halls here immediately after the war. The less conventional groups are found on the east side of the parks. Among them were Japanese visitors, some looking puzzled, others delighted. Perhaps they thought cricket was England’s answer to the tea ceremony. They may be right.

The University of Oxford players are on a pre-season tour of Barbados, so this UCCE squad is made up entirely of Oxford Brookes students. Their alignment in the first two sessions is particularly sharp but their mistakes are expensive. On the 38, Cornall’s sharp disc flies more or less unhindered between wicketkeeper Joe Millard and first slip Whitlock. The Worcestershire fly-half would go on to make 84 before Millard redeemed himself from local skipper Chris McBride.

A little more seriously, when he made 23 Jack Haynes nicks slow left arm Connor Haddow for the first slip, where Joe Gordon just can’t take his chance. A few balls later, Haynes drives the spinner just over a mid-bound McBride. Those will be more or less his last mistakes before Haddow knocks him out of the inside edge just before the fence. By then, Worcestershire’s current best young hitter will have gifted us with shots through coverage and halfway through, despite only hitting six fours from a hundred and ten in his final tally of 127.

Cornall is fired just after 2:30 p.m. and we hear our first “Let’s go bang-bang” of the season. It’s like the first hello of spring and just as deceptive. For Haynes and D’Oliveira will put 120 either side of the tea, and in the evening session the expected Worcestershire dominance is evident on a pitch that does credit to gardener John Buddington, a lad from Sunderland who arrived at the parks via Tunbridge Wells and Horham. Buddington is clearly a good egg and his work illustrates the important point that while Universities matches may have lost their top-class status, they still provide valuable preparation and are taken seriously. Counties wouldn’t play them otherwise.

And yet none of this would have been so memorable or oddly blessed if our afternoon had not been enriched by the roughly 200 cheerful students, presumably from Brookes, who gathered on this sunny and cheered more or less on everything their friends did. Each call was backed by a choir; every decent save was applauded. There was a chorus of “Jerusalem” and for once it didn’t sound like brain dead nationalism. There were other songs too: there is, in case of doubt, only one Joe Gordon. To do a circuit or three was to be revived after a dismal end to the season by the exuberance of youth. Yes, there were lots of cans of beer and lots of bottles of wine. Indeed, throw in a few tents and lots of mud and you’ve had cricket’s answer to the Glastonbury Festival. Even the Worcestershire players savored the spectacle. We wonder if any of them had such a pleasant first day of the season.

At seven o’clock, however, Oxford was in near darkness. The cranes that currently rival domes in this enchanted city have been darkened, as have the Ukrainian flags that fly over college towers, residents’ windows and Blackwell’s bookstore. Even in this place, where one can so easily be seduced by memories of, say, snowy December, current concerns cannot be avoided. But in this case, the advance of the clocks was of little importance. The one on the facade of the famous Parks Pavilion had not been put back in place in October, presumably on the solid basis that very few people would watch it outside of cricket season. And the suggestion that Oxford has its own way of counting time may not have come as a surprise to on-court spectators in this balmy March. For at least one of them, Jack Haynes will always drive the ball through the covers and there will always be a low door in the wall.