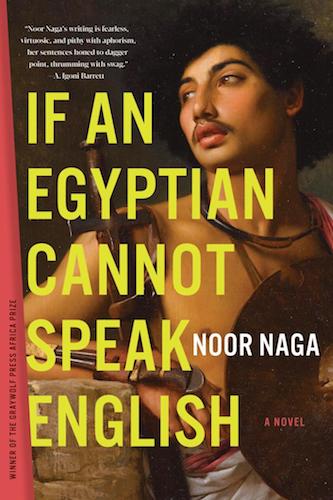 The following is excerpted from Noor Naga’s new novel, If an Egyptian does not speak English. Noor Naga is an Alexandrian writer and author of a novel in verse, wash, pray. She is the winner of the Bronwen Wallace Prize, the RBC/PEN Canada Prize and the Disquiet Fiction Prize. She teaches at the American University in Cairo.

Question: If you don’t have anything nice to say, should your mother be punished?

And then Mother placed a single peach on a saucer in the center of the table. With a carving knife, divide it into four. Having dinner, she says. My grandmother, whose perfect teeth were individually stolen by a dentist working in his room across the river and having patients sit on the bed he sleeps in, took all the fishing quarters and the crushed in his ears. Such greed, said Mother, sucking the hollow seed. Father breathed. Swinging her elbows like a walker, Grandma bustled into the kitchen and climbed into the stove. The next day they put her collection of paper cranes in the ground with her, so I left. It was ten years ago. The distance from Shobrakheit to Cairo is 140 kilometers. I took a micro-bus, then the train.

Question: Is it arrogant to go back to a place you’ve never been?

If I was a white girl with a shaved head, they probably wouldn’t have cared. But because I was an Egyptian with a shaved head, they didn’t want me to forget her. All was well at JFK. Even when four hundred Egyptians boarded a Boeing 777 bound for Cairo, no one noticed me. For twelve hours our heads nodded, lounging against each other as we dozed and dreamed, and it was impossible to tell in the canned darkness who was who. Then the lights came on and we landed. Those same four hundred passengers disembarking on the other side seemed to have forgotten where we had come from. They looked at me openly and walked down the aisle, all of a sudden suspicious. No one helped me get my backpack out of the rack. At passport control, the officer looked like a younger version of my father. Slender, brown and long-faced, with silver glasses that gave him a pained look and shimmering with sensitivity. Behind me, the line was long and noisy, but he quietly held my US passport in his hands, as if it were a book he had already read. He spoke my name, searched my face like strangers study the daughters of a niqab-wearing woman, noting the texture of their hair, the puckering of their mouths, mentally aging children’s faces, searching for the beauty of the mother. It was clear that the officer imagined me with hair. He was looking for the Egyptian in me, or maybe the disease. I wanted to say, Same. I had filled in the boxes of the declaration form with a child’s handwriting, articulating the tooth of each letter Fishing and pointing my diacritics individually. The effect was neat but laborious. What brings you? he asked in Arabic. Do you have an Egyptian passport? I shook my head. National ID card? I said, Sorry? He sent me out of line and around the corner to another man, who was very tall, with purple under-eye circles, smoking cigarettes in a glass booth. It looked trapped in it, like it was on display in a museum.

This man finished his cigarette, brushing my passport with his thumb before asking in English, How long are you staying ? I tried to tell him that I was staying for good. Six months, okay? he asked and i nodded because his english was poor but my arabic was poorer. He made a loop and a dash on a pink slip. Take this, go up the stairs in this office, you pay, you come back here. I walked up the stairs to the second office and there was no one there. When I came back to the man in the window, he shouted over his shoulder in Arabic: Dinah! Go tell that son of a shoe to sit down at the cash desk! and shot me out of the hand before I could explain myself. The son of a shoe was about fourteen, with matching purple eye-rings, smiling. I paid it and went back to the smoker, who sent me back to the passport control line with a paper visa in hand. Hey, American! Come here! It was the officer before, the one who looked like my father, who called me to the front. All the other Egyptians glared at me as I apologized in line. I wanted to explain that I was one of them, that I had queued earlier and had paid my dues, but my Arabic. . . The officer stamped my passport, gave me a wink and let me through.

Question: If your mother wanted to feed you forever, why would she cut the cord?

After my grandmother died in the oven, I knew I would leave Shobrakheit for good. During the last conversation I had with mom, I said: I’m going to Cairo. She sat down tenderly, overlapping the sole of her shoe on the heel. From behind her concentration, she muttered, Cairo, Cairo. . . is it beyond the dovecote? I said, Yes. His eyes watering from the chemical smell. Son, is it beyond the hospital across the river? I said, Yesthen added, It is even beyond Damanhour. What? She gasped. And there are people beyond Damanhour? I hoisted a bag of corn clothes over my shoulder, the camera swinging around my neck. She lifted a hand to smooth her hair back, and the shoe, now stuck to her thumb, went with it. Bloodied his eye. I took a microbus from Shobrakheit to Damanhour and the fog was so thick we couldn’t even see the dotted road lines. The driver poked his head out the window. There was no one in the white air except us. I cried into my bag of corn. For days after my grandmother cooked herself to death, Mom didn’t say it, but we still knew she was sour thinking: Shame to waste the gas and not eat. The whole village knew she was wondering how best to divide a peach into three. From Damanhour I took the train to Cairo and inside the air was very brown, like the air of a cupboard. I fell asleep and woke up to a man feeling my thigh through my torn pocket. People think that anyone with a camera will have coins instead of skins in their pocket. When I arrived at Ramses station in Cairo, the air was at people. Nowhere you looked were there no people. They blocked all the streets and then piled up on top of each other in twenty-story buildings. Many were not even Egyptian. You could turn down an alley and find fifty Sudanese men, more blue than black, with cheeks like shoulder blades and ankles like knives, or women as tall as me, women so pale you could see blood flowing on their wrists and necks. I heard twenty Arabs the first week and everywhere I went people asked me – sometimes in English because of the hair –Where do you come from? While a man was asking me that, another spinner on a motorbike stole a cigarette from my hand. While waiting for my turn to order a sandwich, I saw children in school uniforms drowning kittens in a barrel of tar. A waitress about my mother’s age approached me, slapping gum with her mouth open: I like big boys like you, won’t you kiss me? My first year in Cairo, I was still speaking country, referring to myself in the plural. We do, I answered. She laughed in my face. Led me by the hand into a garage, where she ran her tongue over my teeth and rubbed my knees. I was nineteen. That was ten years ago, in 2007, and since then I have only been home once. Somewhere in Shobrakheit, my mother splits all the fruit for dinner in half.

2022-04-20
Previous Post: English Premier League rivals Arsenal and Chelsea will meet in Orlando on July 23
Next Post: Cumbrian Libraries are offering free books to those looking to develop their English skills