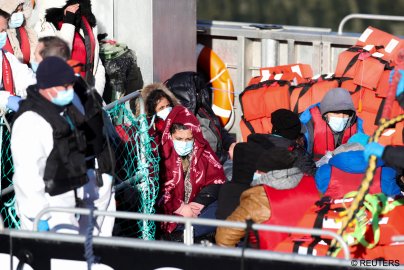 Hundreds cross the Channel to the UK

In recent days, more than 300 migrants have crossed the English Channel from France to the United Kingdom. More than 100 were intercepted by French authorities before they left the coast. One person has been declared dead.

On Thursday 13 January, the UK Home Office (Home Office) confirmed to the BBC that 270 other migrants had managed to cross the English Channel. These arrivals are in addition to 96 who crossed on three separate boats on Monday 10 January. They were all brought ashore in Dover, on the south coast of England.

Despite the cold it seems that those who hope to cross the Channel from the French coasts remain numerous. According to figures compiled by the press association and the BBCmore than 28,000 migrants managed to cross the English Channel in 2021, more than three times as many as those who made it in 2020.

So far in January this year, the BBC reports that more than 450 people have crossed the Channel to the UK. The number of migrants who arrived on Thursday alone “is higher than the total total for January of last year”, according to the BBC wrote.

A series of rescues at sea

During the first week of January, French authorities at the Préfecture maritime de la Manche et de la mer du Nord (Préfecture maritime Manche et mer du Nord) issued severe weather warnings, trying to dissuade migrants from attempting the irregular journey to the UK. Yet the first migrant rescue they reported took place on Monday, January 10. During the night of Sunday to Monday, the maritime authorities indicated that they had found several small boats in distress in the Pas-de-Calais.

On January 12 and 13, the French prefecture reported that the coastguard had picked up another boat with 34 migrants on board and taken them to Dunkirk. Meanwhile, a navy boat picked up 26 more and brought them back to Calais and Dunkirk.

On Friday January 14, the French authorities went to the aid of yet another migrant boat in difficulty. “At least one person is believed to be in the water,” the press release read. Authorities sent several boats and a helicopter to the scene.

An unconscious person was recovered and brought directly aboard one of the French ships. “Later, after landing, this person was unfortunately pronounced dead,” the press release said. Another 25 people were on board the boat, and five migrants have meanwhile been picked up from a sandbank by the fire and rescue services during simultaneous rescue operations.

These 30 people were reported “safe and sound” and were taken care of by French relief at Berck-sur-mer. An investigation has been opened into the incident, the press release said.

The UK Nationality and Borders Bill

Since taking office, UK Home Secretary (Home Secretary) Priti Patel has repeatedly said she wants to stop people crossing the English Channel while cracking down on ‘criminal gangs’ who facilitate the means of irregular migration fraught with danger.

The new Nationality and Borders Bill currently before the UK Parliament is her latest attempt to fix the UK’s asylum system, which she has said is ‘broken’. However, the Conservative Party, of which she is a member, has been in power in successive governments since 2010 and has never attempted to change the country’s immigration guidelines to such a drastic degree before.

The bill was passed by the House of Commons on December 9 and is currently before the House of Lords for legal consideration. He must undergo three more stages there before moving on to the final stages, which is normally only a formality if he passes both houses.

Priti Patel reiterated on Twitter that she hopes the bill will “speed up the removal of failed asylum seekers…introduce new maximum life sentences for smugglers…stop illegal arrivals from entering immediately into the asylum system if they were passing through a safe country [and] increase the maximum penalty for illegal entry into the UK.”

On January 5, Patel posted a Daily mail story on her Twitter feed, saying she hoped the bill would also prevent the “immigration and asylum system from being abused.” The story detailed allegations of adults ‘posing as child asylum seekers’ and said those posing as underage migrants could be subject to ‘X-ray age checks’ to determine their actual physiological age.

the #BordersBill will end many of the egregious abuses that have led to the abuse of our immigration and asylum system.

We are changing UK laws to introduce new scientific methods of age-assessment of asylum seekers to end this appalling abuse 👇🏽https://t.co/gAd5iKPz7Y

Jet skis in the English Channel?

The British government has also mentioned the launch of jet skis to reinforce patrols in the English Channel. Videos of the jetskis appeared on the Reuters news agency earlier this week: however, it is unclear if they were actually deployed.

In September, the Independent The newspaper said they were being used in maneuvers with the intention of turning back migrant boats in the English Channel, but it is unlikely a jetski could be deployed so far from UK shores unless the sea is rough calmed down.

The idea of ​​turning the boats back at sea has also been heavily criticized by human rights groups and trade unions who themselves represent the UK Border Force, calling the plans dangerous and illegal.

Britain meanwhile has pledged to pay millions of euros to the French over the past two years to boost security on French coasts to prevent irregular crossings. The number of those attempting to cross by truck and Eurotunnel train has dropped significantly since that engagement, but the number of those attempting the sea route has meanwhile increased.

Today the French government, which currently holds the rotating EU presidency for six months, proposed that the whole of the EU should come together to negotiate a treaty on asylum and migration with the UK , which is no longer part of the European Union.

According to an article in the British newspaper The Guardiana senior French government official said an EU-UK treaty would be designed to “open up a legal pathway for immigration with Britain, so that people can legally travel to the UK to apply for asylum”.

The French official added that such a treaty would also mean reciprocal agreements, indicating that British authorities would be able to return people who have been refused asylum in Britain to the EU country in which they are. arrived for the first time. This process would resemble the current EU agreement, known as the “Dublin Protocols”.

Since the UK left the EU, the island nation can no longer send asylum seekers directly back to France or any other EU country as they could when they were part of the EU before Brexit. However, it is unclear to what extent the UK might be willing to sign on to the plans: in late 2021, following the death of 27 migrants in the English Channel, relations once again became strained between Britain and the UK. France, ending with Priti Patel not being invited. of a conference of European ministers to discuss the problem of migrants crossing the Channel.

In conversations, migrants said InfoMigrants in Calais in July 2021 that one of the main reasons they are traveling to the UK in increasing numbers is the fact that they are excluded from the Dublin Protocols. Many now see the UK as a place where they can have their asylum claim heard without fear of being deported to another EU country – usually one they have tried to leave before.

For example, several Kurdish Iraqis speaking in secret said InfoMigrants that they had received letters in Germany telling them that they had to leave the country and return to Romania, where they had first had their fingerprints registered in the EU. Rather than risk being deported to Romania – and potentially sent back to Iraqi Kurdistan – they said they had decided to try to cross over to the UK after Brexit.

Additionally, with the UK having no ID or civil status requirements like Germany, migrants view the country as a place where it may be easier to find non-officials in communities. of long-established migrants, while remaining undetected for years.

2022-01-14
Previous Post: Channel: The number of migrants rescued by France tripled in 2021
Next Post: A Sudanese man died trying to cross the English Channel – French authorities