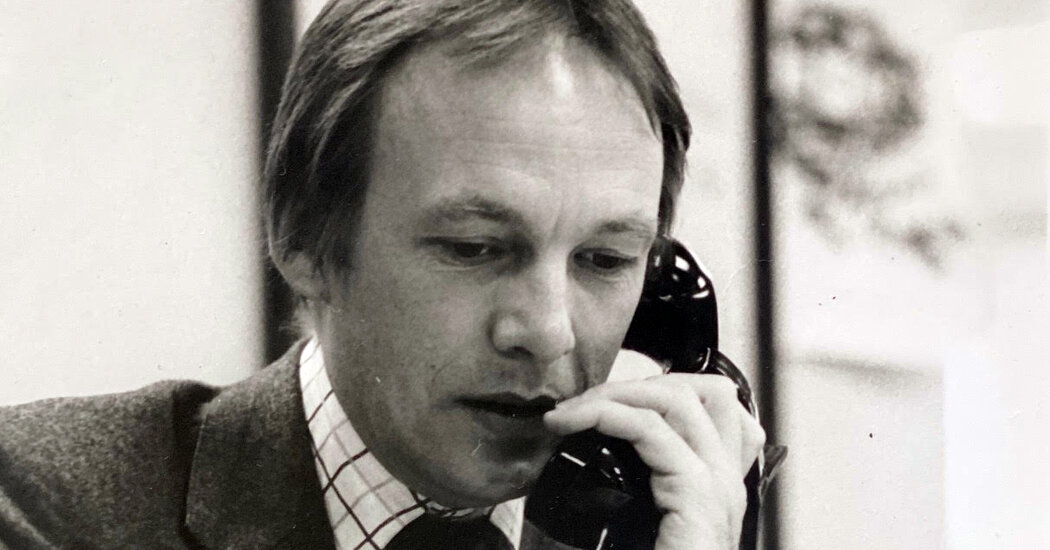 Henry Scott Stokes, a British-born journalist who demystified Japan for English-speaking readers as Tokyo bureau chief for three major newspapers and as the author of a comprehensive book that evoked his venerable samurai values ​​and its right-wing nationalist elements, died in April. 17 in a Tokyo hospital. He was 83 years old.

The cause was complications from Parkinson’s disease, said his son, Harry Sugiyama Scott-Stokes.

After leaving daily journalism, he courted controversy with comments seemingly sympathetic to the views of right-wing Japanese nationalists, one of whom he described in his best-known book, a penetrating biography of aristocratic novelist Yukio Mishima. Mr. Scott Stokes met Mishima in 1966 in Tokyo at the Foreign Correspondents’ Club of Japan and later bonded with him over brandy at Mr. Scott Stokes’ favorite hideaway, the Orchid Bar at the Okura Hotel in Tokyo.

In “The Life and Death of Yukio Mishima” (1974), Mr. Scott Stokes explored the novelist’s harrowing evolution from lonely child to delusional nationalist who, in 1970, rounded up four members of his unarmed private militia , invaded a military installation, kidnapped the commander, pleaded unsuccessfully with the base’s uncaring troops to restore the sacred traditions of Emperor worship, then committed ritual suicide known as seppuku, disemboweling himself. He had ordered a supporter to cut off his head afterwards.

Mr Scott Stokes ran to the scene but arrived too late to save his friend.

Describing Mishima as “the most famous Japanese of his time”, he wrote: “There is a saying here. “The protruding nail will be driven in with a hammer. The Japanese don’t like to stand up and shout for fear of being hammered. The paradox is that Mishima, when the time came, hammered himself.

Reviewing the book in The New York Times, Christopher Lehmann-Haupt wrote that it “begins with the ending of Mishima, and naturally one devours Henry Scott Stokes’ study in search of an explanation for that ending” . (“The explanation for Mishima’s death”, Mr. Scott Stokes concluded, “lies in his whole life”.)

Throughout his career, most of it spent in Japan, Mr. Scott Stokes could barely speak or write Japanese. This disability has contributed to a major controversy.

It was the 2013 book “Falacies in the Allied Nations’ Historical Perceptions as Observed by a British Journalist”, which was published in Japanese and embraced by right-wing apologists for atrocities committed by the Japanese military during the Second World War. World War. It sold around 100,000 copies within a few months.

While the book had the imprimatur of a credible Western journalist, in fact, according to Mr. Scott Stokes, it was synthesized from 170 hours of interviews he gave to a Japanese translator associated with an educational organization which supports revisionist history. Moreover, Mr. Scott Stokes said that, although the book was credited to him, he had never even read it, let alone written it.

The book’s most explosive passage was its conclusion that the Nanjing Massacre, which most historians believe resulted in the deaths of tens of thousands of Chinese civilians in 1937 by rapacious Japanese troops over six weeks, “did not not take place”, but had rather been inflated. or even fabricated by Chinese nationalists and later by communist propagandists.

Mr Scott Stokes told a Japanese news agency he was “shocked and horrified” by what he called a “rogue passage” in the book. Then he reversed himself, issuing a statement through his publisher in which he effectively stuck to the offending passage, calling the massacre an “incident”. In later interviews, he again backtracked, agreeing that “terrible events” had happened in Nanjing but that the Japanese were not solely responsible.

As recently as 2017, he reportedly said, “The idea that Nanjing was fabricated, as a historical incident, is really hard to sustain due to eyewitness reactions.” But he also expressed the view that the atomic bombings of Hiroshima and Nagasaki by the United States were “monstrosities”, calling them “war crimes of such magnitude as the alleged crimes of the Japanese in this war seem absolutely minor”.

“Henry was both talented and controversial,” said Bradley K. Martin, a former Wall Street Journal and Asia Times reporter, in an obituary for Scott Stokes published by the Foreign Correspondents’ Club of Japan. “I came to appreciate his willingness to rethink his own position if he concluded he had been wrong and try to make amends.”

Henry Johnstone Morland Scott-Stokes (as an adult he rarely used the hyphen) was born on June 15, 1938 in the town of Glastonbury, Somerset, in the southwest of England. His parents were Quakers – his mother a pacifist and his father, who served in both world wars, a businessman.

After graduating from New College, Oxford, he joined the Financial Times in 1961 and was posted to Tokyo with his new wife, Charlotte, three years later. The marriage ended in divorce.

He is survived by his second wife, Akiko Sugiyama, who served as his unofficial translator, in addition to their son, a TV show host and commentator in Japan.

Mr. Scott Stokes also edited, with Lee Jai Eui, “The Kwangju Uprising: A Miracle of Asian Democracy as Seen by the Western and the Korean Press” (2000), on the violent crushing of a popular revolt against a government unelected South Korean. in 1980.

In addition to writing books, he has collaborated with artists Christo and Jeanne Claude on their joint project to install hundreds of giant umbrellas – nearly 20 feet tall and over 28 feet in diameter – in Japan and California. in 1991. The blue ones grew in rice fields near Tokyo, and the yellow ones sprouted on the Californian hillsides. Mr. Scott Stokes was the project manager in Japan.