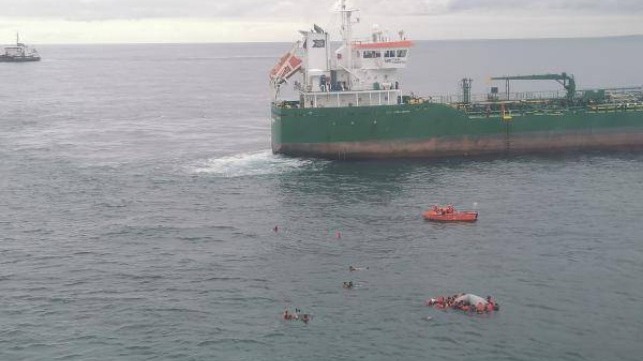 
On Saturday, the French rescue coordination center CROSS Gris-Nez organized a rescue for 39 maritime migrants who fell into the water in the Strait of Pas-de-Calais. The center had the help of three good Samaritan ships, and working together they were able to pick up all of the survivors, with no loss of life.

During the day, the center received an alert indicating that a migrant boat was in difficulty in the strait. Several of the passengers had fallen overboard in cold water.

The lookouts broadcast a general distress message calling for help from nearby merchant ships. Simultaneously, they launched multiple rescue means: a Dauphin helicopter from the French Navy based in Le Touquet; French Navy public service patrol boat Cormorant; and the all-weather lifeboat President Jacques Huret, operated by the National Society for Rescue at Sea (SNSM) of Boulogne-sur-Mer. The British helicopter HM Coastguard Rescue 163 was also put on alert.

Meanwhile, three good samaritans – the fishing boat Started from nothing and two merchant ships, the Arco Dijk and the Garland of Thun – quickly responded to the scene.

On arrival, the crew of the French Dauphin helicopter found that the boat had already sunk and that 39 survivors were in the water. Six of the migrants were hoisted aboard the helicopter and evacuated to hospital in Boulogne.

The crews of Arco Dijk and Garland of Thun launch their lifeboats and each embark several survivors. The fishing vessel Started from nothing picked up several other migrants from the sea itself, and she transferred on board any survivors who had been rescued by the lifeboats of the two larger ships.

Two crew members President Jacques Huret all-weather lifeboat also transferred to Started from nothing in order to carry out a medical check-up of the 33 survivors collected on board. The escort lifeboat, the Started from nothing directed to the port of Boulogne-sur-Mer, where the migrants were transferred under the guard of border police and local firefighters.

Meanwhile, the Dauphin helicopter returned to the area, joined by HM Coastguard’s Rescue 163 and the PSP Cormorant. Together they swept the site to ensure that there were no more struggling staff.

“The maritime prefecture of the Channel and the North Sea warns anyone who plans to cross the Channel of the risks involved”, warned the regional director Prémar Manche in a press release. “This maritime sector is one of the busiest in the world. The weather conditions are often difficult (120 days of wind greater than or equal to Force 7 on average per year), and it is therefore particularly dangerous.”

Despite the risks, an unusually high number of migrants have tried to cross the English Channel from France to the UK in recent months, raising concerns among the British public (and UK Home Office officials). The British government has introduced new “push back” measures to deter irregular maritime migration.