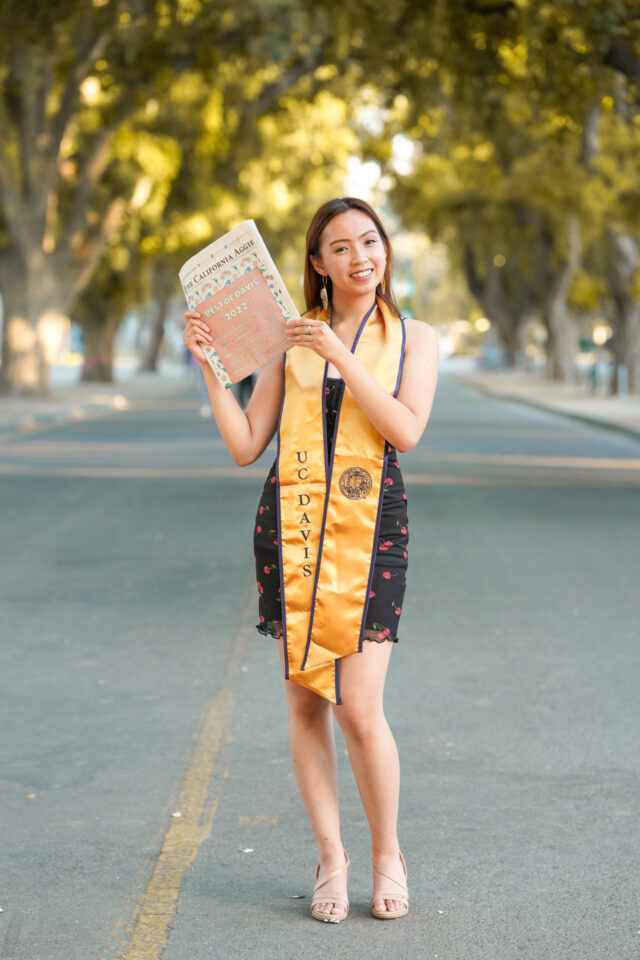 Step away from tradition and chart a new course

When I started my undergraduate career at UC Davis as an English major, I felt extremely worried about my future. As the eldest daughter of an immigrant family, I did something quite unexpected: I moved away from a more traditional career path and decided to pursue an education in the arts. My family and friends initially expected me to pursue something in business or medicine, but I had been an avid reader and writer since childhood and couldn’t ignore my love for stories. I knew I wanted to pursue a career related to writing, but at the time I didn’t know exactly what that would entail.

Although my family and friends came out to support my decision, I started my undergraduate career feeling a bit uneasy. Being the only English student in my graduating class in high school, I got used to hearing questions like “What can you do with a degree in English?” and “Do you want to be a teacher?” There was this notion – whether stated directly or indirectly – that pursuing a degree in English guaranteed limited career results and poor financial prospects.

“There’s a common misconception that people who major in the arts do so because they’re not smart enough to pursue something in STEM, but my decision to pursue an English degree had less to do with my intelligence level (perceived) and more with my passion for writing.

Often, I felt like people looked down on me for getting a humanities degree. There’s a common misconception that people who major in the arts do so because they’re not smart enough to pursue something in STEM, but my decision to pursue an English degree had less to do with my intelligence level (perceived) and more with my passion for writing.

Although I initially struggled to get involved in writing-related projects on campus, the COVID-19 pandemic has given me more time to write. In April 2020, I became a staff writer for The California Aggie. I wrote weekly articles for the city’s news bureau for just over a year, during which time I was able to interview and build supportive relationships with various industry professionals and residents from the Davis and Sacramento area from a variety of backgrounds. By making a continuous effort to understand the people I interviewed, I was able to better understand the needs of our community and write more comprehensive articles accordingly.

Throughout the pandemic, I had the opportunity to explore different types of writing. My position as an editor for The Aggie allowed me to explore journalistic writing while exploring other genres of writing alongside it. My blog post “Exploring and expressing creativity in Animal Crossing: New Horizons” was selected to be featured on the Mondavi Center website. Also, some of my poems have been featured in Third Iris Zine.

In June 2021, I became Outreach Director for The California Aggie, and I stopped writing articles in order to focus on more communications-related writing. Although I realized towards the end of college that I wanted to pursue other styles of writing instead of journalism, that same love for stories that drove me to pursue English studies didn’t. never changed.

Jelena Lapuz joined The Aggie in the spring of 2020 as an editor in the city news desk and later became the first outreach director for The Aggie in June 2021. She graduated with a bachelor’s degree in English with a major in creative writing and a minor in professional. writing.