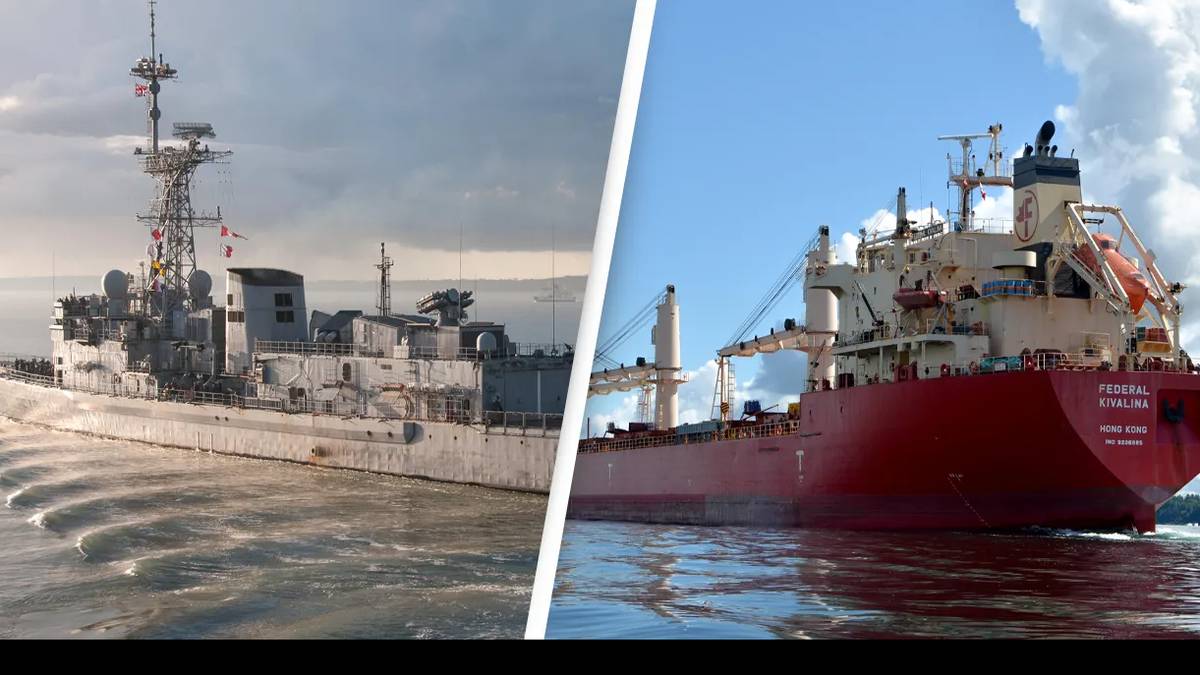 The French navy is said to have intercepted a Russian freighter, the “Baltic Leader”, in the English Channel.

The boat is believed to be heading for St. Petersburg and was intercepted under new European Union (EU) sanctions.

Sanctions were imposed on Russia by the EU and G7 countries following President Vladimir Putin’s invasion of Ukraine on February 24.

A 127-meter-long Russian freighter called the “Baltic Leader” was intercepted overnight by the French Navy in the English Channel and escorted to Boulogne-sur-Mer, according to French authorities

Transporting cars, he is suspected of belonging to a company targeted by EU sanctions

The ship was due to reach Saint Petersburg on March 3 but was redirected to a port in Boulogne-Sur-Mer, France, BBC News reports.

According to an anonymous official, the Russian 127 m freighter was “routed to the French port at the request of the French government because it is suspected of belonging to a company targeted by EU sanctions against Moscow”.

They added that French border forces were investigating the cargo and that the crew was cooperating with French authorities.

The Russian Embassy in Paris is wondering why the ship was seized, according to the Russian RIA Press Agency.

I spoke with G7 leaders today, and we wholeheartedly agree:

We will limit Russia’s ability to be part of the global economy.

We will delay their ability to finance and develop the Russian military.

We will compromise their ability to compete in a 21st century high-tech economy.

The interception comes a day after EU and G7 members imposed a package of economic sanctions on Russia in a show of support for Ukraine.

Sanctions include limiting Russia’s ability to function as part of the global economy, including sanctions against Russian oligarchs as well as financial sanctions, in accordance with AlJazeera.

Speaking about EU sanctions, German Foreign Minister Annalena Baerbock said: “We are hitting Putin’s system where it needs to be hit, not only economically and financially, but also at the core of its power.”

Today I thanked our financial services sector for their efforts to ensure that the sanctions implemented against Russia are strong and effective.

If things get any worse, tougher sanctions are ready to punish President Putin for his destructive course of action. pic.twitter.com/CjwfZhj4BO

British Prime Minister Boris Johnson also commented on the sanctions imposed, thanking the UK‘s financial services sector for helping to ensure that “robust and effective” sanctions were implemented against Russia.

New economic sanctions are being considered as Putin’s invasion of Ukraine continues.

Today, February 26, marks the third day of the war, with 198 people reportedly killed and 1,000 injured in Ukraine.

Ukrainian Health Minister Viktor Lyashko reported the number, with three children among the dead, although Putin said only the military would be targeted.

If you would like to donate to the Red Cross Emergency Appeal, which will help provide food, medicine and basic medical supplies, shelter and water to people in Ukraine, click here for more information

2022-02-26
Previous Post: Inflation ate their lunch, but Americans made heroic efforts to spend
Next Post: How an English spy hatched an invasion plan to take over ‘wealthy and flourishing’ Scotland