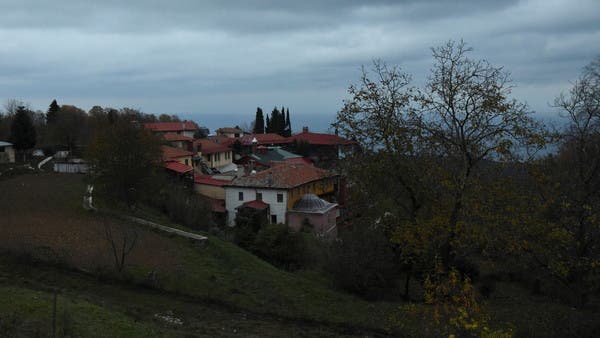 Experts work on rare manuscripts in a Greek monastery

A church bell rings, the jerky sound of the mallet on the plank calls the monks to afternoon prayer, deep voices rise in common chant.

And high in the great tower of the Pantokrator Monastery, a metal library door opens.

There, deep within the fortified medieval monastery of the Mount Athos monastic community, researchers are unearthing a virtually unknown treasure for the first time – thousands of manuscripts from the Ottoman era, including the oldest of their kind in the world.

The Autonomous Community Libraries, established more than 1,000 years ago on the Athos peninsula in northern Greece, are a repository of rare and centuries-old works in several languages, including Greek, Russian and Romanian.

Many have been studied extensively, but not the Ottoman Turkish documents, products of an occupying bureaucracy that ruled northern Greece from the late 14th century – long before the Byzantine capital, Constantinople, fell to the Ottomans in 1453 – until the early 20th century when the region became Greek again.

Byzantine scholar Yiannis Niehoff-Panagiotidis says it is impossible to understand the economy and society of Mount Athos under Ottoman rule without consulting these documents, which regulated the monks’ relationship with secular authorities.

Niehoff-Panagiotidis, a professor at the Free University of Berlin, said the oldest of some 25,000 Ottoman works found in monastic libraries dates from 1374 or 1371.

It is older than anything known in the world, he said, adding that in Istanbul, while the Ottomans renamed Constantinople when they made the city their own capital, the records oldest only date back to 1480 or 1490.

Father Theophilos, a monk helping with the research, carefully pulls out some of the rarest documents that are stored in large wooden drawers in the library of Pantokrator Monastery, one of 20 on the heavily forested peninsula.

These include the ornate firmans or decrees of the sultans, deeds of ownership, and court decisions.

Anastasios Nikopoulos, a lawyer and scientific collaborator at the Free University of Berlin, who has been working with Niehoff-Panagiotidis on the project for a few months, said the overwhelming majority are legal documents.

And the manuscripts tell a story at odds with the traditional understanding in Greece of Ottoman depredations in newly conquered areas, through the confiscation of the rich real estate properties of the monasteries of Mount Athos.

Instead, the new rulers took the community under their wing, preserved its autonomy and shielded it from outside interference.

“The firmans of the sultans that we saw in the tower…and the decisions of the courts of the Ottoman state show that the small democracy of the monks was able to win the respect of all the conquering powers,” Nikopoulos said.

“And that’s because Mount Athos was considered a cradle of peace, of culture… where peoples and civilizations coexisted peacefully.”

Nikopoulos said one of the first actions of Murad II, the Ottoman ruler who conquered Thessaloniki – the closest city to Mount Athos – was to draft a legal document in 1430 protecting the community.

“That says a lot. The Ottoman Sultan himself ensured that the administrative system of Mount Athos was preserved and safeguarded,” he said.

Even before that, Niehoff-Panagiotidis added, a sultan issued a warrant with strict penalties for trespassers after a band of marauding soldiers engaged in minor thefts at one of the monasteries.

“It is strange that the sultans kept Mount Athos, the last remnant of Byzantium, semi-independent and did not touch it,” he said.

“They didn’t even keep troops here. At most they would have a local representative who would probably have stayed at the (community administrative center) Karyes and drank tea.

Another unexpected revelation, Niehoff-Panagiotidis said, was that for about the first two centuries of Ottoman rule, no effort was made to impose Islamic law on Mount Athos or in neighboring areas of northern Greece. .

“What is strange is that the sultans kept Mount Athos as the last vestige of Byzantium,” he said.

The community was first granted self-government by a decree from the Byzantine Emperor Basil II, in 883 AD.

Throughout its history, women have been banned from entering, a ban that still stands.

This rule is called “avaton” and researchers believe it relates to all forms of disturbance that could affect Mount Athos.