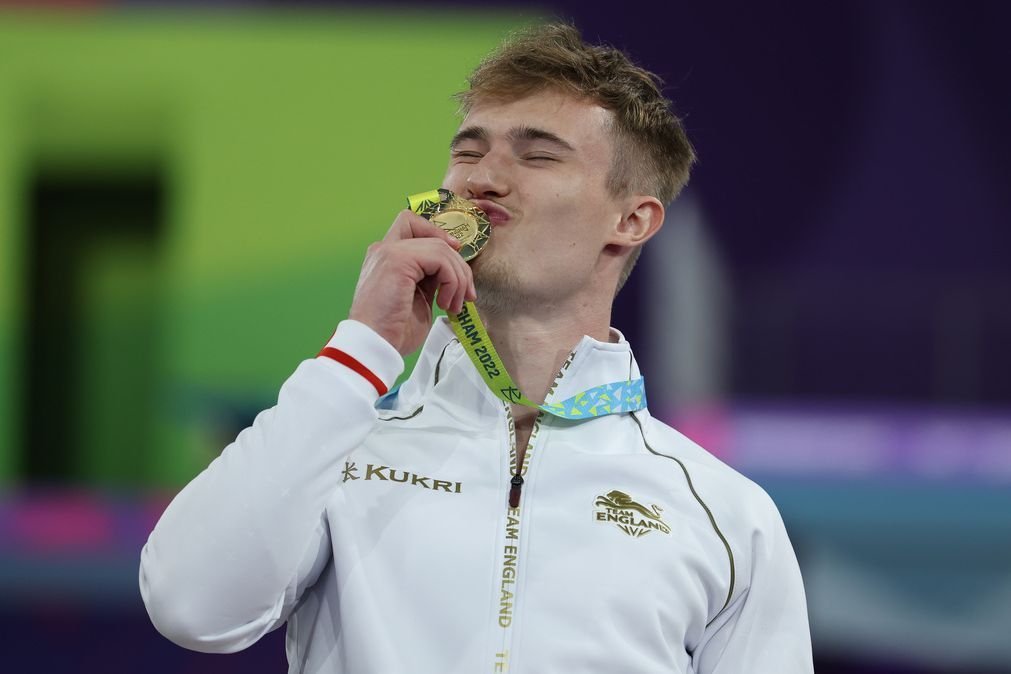 Laugher, 27, who was England’s flag bearer at the opening ceremony last week, continued a run that also included gold in Glasgow in 2014 and Australia’s Gold Coast four years ago year.

He had been below his best in the morning preliminary rounds, but peaked from the middle of six rounds to take control and later credited the threat posed by Australian diver Shixin Li for getting him inspired.

Laugher, who won Olympic gold in the 3-meter synchronized event at the Rio de Janeiro Olympics in 2016, scored a total of 447.05 points to beat Li by 10 points. England’s Jordan Houlden took bronze.

“I was under pressure, trying to defend this title, which I’ve had for eight years now,” Laugher said.

2018 Tour de France winner cyclist Geraint Thomas crashed at the start of the individual time trial in Wolverhampton, hitting a barrier during a fast corner. Thomas was able to get back on his bike and recovered well to claim the bronze medal behind winner Rohan Dennis, a two-time world time trial champion.

“I just went into the corner a little too hot. (I only have) myself to blame. I went too hard after that, with all the adrenaline,” Thomas said.

LaQuan Nairn of the Bahamas won the men’s long jump ahead of India’s Murali Sreeshankar. Both jumped 8.08 meters, but the gold medal was awarded to Nairn because his second jump was further than Sreeshankar’s.

Athletics events in Birmingham have been hit with a number of forfeits.

The event’s proximity to the world championships in Oregon in late July and other major meetings saw Jamaican sprint star Shelly-Ann Fraser-Pryce opt against the race.

But injuries and illness are also causing problems, with the Australian team being hit by the withdrawal of three medal contenders.

Stewart McSweyn, runner-up in the 1,500 meters final in Tokyo, did not take his place in the qualifying heats of the morning session due to the flu. Kathryn Mitchell, a javelin gold medalist on the Gold Coast four years ago, was also ruled out of competition in Birmingham.

Athletics Australia said Mitchell was suffering from an unknown virus which she contracted while traveling from the United States.

Earlier, Jamaica caused a major upset in netball when they beat gold medal favorites Australia to reach the semi-finals with a 57-55 comeback win.

“It’s a bit surreal to beat Australia at the Commonwealth Games,” Fowler said. “We’ve never done this before but our team is amazing and we went out there and proved everyone wrong and it feels so good.”

In men’s field hockey, Australia, who are yet to concede a goal in the tournament, beat Pakistan 7-0 to advance to a semi-final with England. India and South Africa will play in the other semi-final. The two men’s semi-finals are scheduled for Saturday and the final on Monday.

The women’s field hockey semi-finals are scheduled for Friday, with New Zealand playing England and Australia taking on India.

In women’s cricket, India qualified for the semi-finals with a 100 run win over Barbados. Jemimah Rodrigues hit 56 of 46 balls to lead India to a competitive 162 for four.

It proved to be beyond Barbados, who could only make it 62 for eight as Renuka Singh Thakur took four wickets for 10 runs.

India will face England and Australia will face New Zealand in the weekend’s cricket semi-finals.

After two Sri Lankan athletes and a trainer went missing on Monday, West Midland Police said two of them had been located but one wrestler was still missing. The Sri Lankan team had ordered athletes and officials to surrender their passports after the wrestler, a judoku and a judoku coach fled on Monday.

The three Sri Lankans have valid visas to stay in the UK for 180 days.

Sri Lanka, which brought a team of 161 people including 51 officials to Birmingham, is in the midst of an economic crisis.

New Zealand are in fourth place with 16 gold, 10 silver and 11 bronze for a total of 37. Scotland and South Africa, with seven gold medals each, the India with six and Wales, Nigeria and Malaysia with four gold medals each complete the top 10.