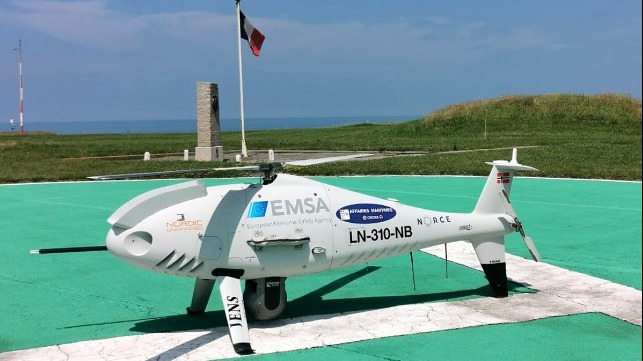 
The European Maritime Safety Agency (EMSA) has taken over emissions monitoring programs for ships operating in EU emission control areas in Northern Europe. In collaboration with the French authorities, specially equipped drones monitor portions of the North Sea and the English Channel. In a similar effort based in Germany, they are launching a large-scale emissions monitoring campaign monitoring ships passing through parts of the Baltic.

These programs are an extension of previous efforts made by EMSA in collaboration with state authorities. EMSA offers free Remotely Piloted Aircraft System (RPAS) services to all EU Member States. Using specially developed systems, they assist maritime surveillance operations and vessel emission monitoring, and can also provide support for traditional coast guard functions, including search and rescue and prevention and prevention. response to pollution.

The program in France with the French Directorate General for Maritime Affairs, Fisheries and Aquaculture is the third emissions monitoring campaign to take place in this particular area. Remotely piloted aircraft supplied by EMSA are used by French authorities to measure sulfur and nitrogen emissions from ships operating in the North Sea and Channel Emission Control Area. The “sniffer drone” systems make it possible to verify compliance by passing ships with the rules limiting the content of certain pollutants in the fuel burned.

The program operates out of the Cap Gris-Nez MRCC due to its proximity to busy shipping lanes that are within flight range of the aircraft used as well as the expertise of the personnel monitoring marine traffic in this area. The RPAS used is a Schiebel Camcopter S100 unmanned helicopter which is operated by EMSA contractor Nordic Unmanned and is fitted with an emissions sensor from Explicit which analyzes gas samples taken as the drone flies through the exhaust plume from the ship’s funnel or chimney. Calculations are then made to determine sulfur and nitrogen levels and indications of non-compliance and may trigger an inspection at the next port of call to determine if a violation has occurred. Since 2020, the Schiebel Camcopter S100 drone operated by Nordic Unmanned teams has flown for more than 430 hours, above more than 600 ships, and carried out measurements on 375 merchant ships.

A similar effort is also launched in May for three months with the Federal Maritime and Hydrographic Agency in Germany. The remotely piloted aircraft will take off from the Staberhuk site of the German Armed Forces on the east coast of Fehmarn and fly over selected vessels operating in the Fehmarn Belt and the Kadetrinne/Kadetrenden to measure the sulfur content of their exhaust plumes at the using specific sensors.

The measurement systems provide real-time results which are made available to responsible authorities in all European ports from the Port State Control Information System operated by EMSA. Using this information, ships can be specifically selected for inspection at their next port of call, and fuel samples can be taken to determine if they are in fact in violation of strict sulfur limits imposed on the region.

As part of the effort in Germany, multispectral aerial images are also being acquired. According to EMSA, for shallow waters, bathymetric values ​​can be extracted from images and allow three-dimensional mapping of the littoral zone. The drone survey campaign will examine whether aerial imagery can provide additional information to the German hydrographic survey service.