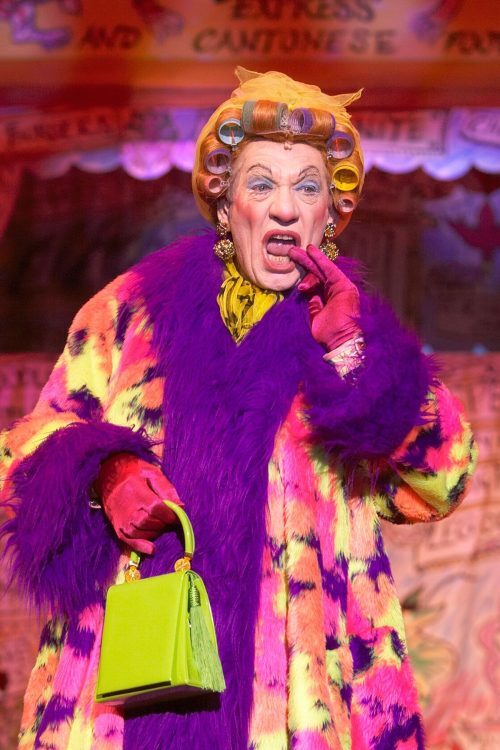 Drag, Transvestite and Furries are essential to English theater – Oh no they’re not

Imagine if you wanted Ron Deathantics or Margerine Traitor-Green to go to a children’s show to see a woman dressed as a man romance another woman, an outrageous drag number, and at least one person dressed in “fur.” Now imagine that the ticket sales from such a successful show meant that the theater was on a solid financial footing for the rest of the year. Welcome to the world of British pantomime and why we find Ron and Marge’s hysterical reaction to “Drag Story Time” so, well, hysterical.

I’ll start with transvestite performances as they have perhaps the longest history with “furs” in plays. If you went to the theater in Shakespeare’s day, all female roles would have been performed by cross-dressing performers – men dressed as women – for the simple reason that actresses were banned. While we’re with the bard, what does “Bottom in A Midsummer’s Night Dream” get a donkey head but “hairy” game?

There is a very gray line between transvestite and drag. The difference is one of the audience’s “suspensions of disbelief” as they are fully aware that the cross-dressing is taking place. dressed as someone of a different sex, often in a hyper-exaggerated way.

Travesti’s portrayals of “characters” are often based on observational comedy. Perhaps the best current example is Brendan O’Carroll’s Dublin street trader ‘Agnes Brown’ on the RTE/BBC show ‘Mrs Brown’s Boys’. The cast includes Brendan’s wife, sister, daughter, son, daughter-in-law, and occasionally grandson. The show is notable for its occasional destruction of the “fourth wall,” so the process, including the fluffy lines and the corpse. One included Brendan’s grandson answering Agnes’ question with “Yes, Grandpa.”

This genre of transvestite performances has a long history dating back to 19th century music halls, but the development of tape recorders accelerated the divide between observational comedy and glamorous drag queens that we see today. The cassettes allowed (let’s say) the less gifted to act out popular songs of the time. Marlene (the “Dietrich” is surely redundant) or Lisa Minelli as Sally Bowles from “Cabaret” were staples on this circuit, as was Shirley Bassey. I would separate them from other drag acts. Some were downright glamorous like Danny La Rue, but an example of observational comics dressed in glamor was the late great Mrs. Shufflewick played by Rex Jameson. His career began during World War II and he mentored LaRue. Unfortunately, there is little of his recorded work. This was recorded about a year before his death when his alcoholism dulled his performance but not his ascerbic wit.

and, more importantly, was a very good singer in his own right. He separated his act from the pure transvestite by interspersing comments from his deep male voice.

In the 1970s and 1980s, “Cissie and Ada” were regular doubles on Les Dawson’s sketch shows on television. Rather than Cockney housekeepers, these were inspired by Dawson’s observations of Lancashire factory workers who frequently resorted to exaggerated lip movements which were necessary to enable lip-reading in an extremely noisy. In perhaps a nod to Jameson, Ada’s last name was Shufflebotham. The act was also a tribute to a former cross-dressing film actor in the “Over the Garden Wall” film.

Although I have given a number of examples of male transvestite performers, in traditional pantomime the transvestite part is usually the “main boy” played by a woman. Pantos are usually based on traditional children’s tales or stories. So, for example, Peter Pan is often played by a woman. Drag is more related to another main character of all pantos, the “Lady”. He’s usually a minor character in terms of the plot, but an entertainment staple that probably appears in more scenes than any other.

It may be easier to understand the cast if we look at a traditional panto that, for once, is (very loosely) based on a historical figure, Richard Whittington. He was a 14th century cloth merchant who served four times as Lord Mayor of London. He was also a benefactor and left a bequest for the benefit of the poor. Like many folk tales, its later story has unhistorical additions. In particular, he was supposed to almost give up going to London to make his fortune, accompanied by his cat and on Highgate Hill he heard the church bells ringing to say “come back Whittington, thrice Lord Mayor” (he was elected the 3rd time and appointed for the 4th term). In the fable, he takes his cat with him on his travels. The cat rids a foreign potentate of rats, Dick is rewarded and returns home to marry his beloved, the daughter of the shopkeeper with whom he stayed before his journey.

Thus, in the panto, “Dick” is often played by a woman as a transvestite. The lady is usually the shopkeeper’s cook, which gives plenty of opportunities for slapstick in the kitchen. The role demands a different, often increasingly outrageous, drag costume for each scene. This panto also calls for an actor to play the cat, the rat king or queen (the villain), and various child roles as “ratlings”. Transvestite, drag and people dressed as animals. You can now hear Ron and Marge’s pearls clicking.

The generic cast is usually supplemented by a male character, often a servant, who acts as a friend to the main girl and provides the straight part in comedy or slapstick scenes, though he is often portrayed as weak or lazy. The lady often leads the singing of comedic songs or interacts with the audience during scene changes.

To a large extent, the types of cast do not vary much between pantos. Thus, in Aladdin, he is one of the sons of the lady washerwoman, the widow Twanky and her brother, Wishy Washy. has the lead role of the young male comedy. Panto shows usually take place at Christmas and for a period after, being taken to one is a rite of passage for most British children. The call isn’t just for kids, what might be taken as an extremely rude double meaning is there for adults.

I hope it goes without saying here that no inference about their sexuality can be drawn from someone being a transvestite, transvestite, or “furry” performer. Living as the opposite sex may be a requirement of transitioning and getting sex reassignment therapy, but the reverse is not true. Someone may find pleasure or comfort in an alternative attire, but they have no intention of transitioning. Some drag performers may benefit from paying for the transition, but offstage most adopt rather more conventional attire. To give an idea of ​​how little Brits care about flirting, Lily Savage was a regular on the main commercial channel’s breakfast show in the 90s (yes, the timestamp is am)

Paul O’Grady has finally hung up Lily’s wig and now has a popular rescue dog show.

Fascism is a form of far right, authoritarian ultranationalismcharacterized by dictatorial power, forced suppression of opposition, and strong regulation of society….

When these ignorant “politicians” poke their noses into other people’s rooms or underwear, call them what they are.

2022-06-20
Previous Post: Several English clubs are interested in the youngster’s free transfer from Arsenal
Next Post: Lando Norris Over the Moon as England golfer Matt Fitzpatrick makes stunning breakthrough at US Open