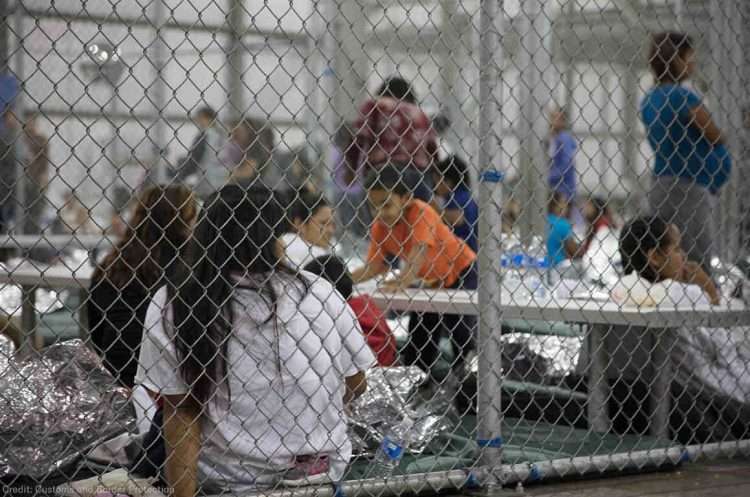 This is Daniela’s migration storytold by herself, once she arrived on American soil:

When we arrived they sat us outside where they receive people and where the computers are. There is also a luggage room where they put all your stuff and give you a ticket. There were thousands of people before us, which means they arrived at dawn or around six in the morning.

There a young man gave us a ticket and they called us by name, they took our picture, and we had to sign and put our fingerprint on a document. There was a young woman, one of those security policewomen of Mexican origin who treated us extremely badly, she treated us badly; by then very few were those who abused us, but she treated us very badly. It was extremely cold, very cold, and she ordered us to take off our coats, even the children who had come on a “trip”. She didn’t care that they were children: she ordered them to take off their coats.

I entered it on March 6 and came out on the 9th at dawn. There were a lot of women in the shelter, and I was like, ‘God, I can’t believe they’ve got us all here,’ but it was like that, and the lights were on all the time. lit. On the floor, there were about four small mattresses, these judo mattresses, the sportsmen, very hard. And they gave us packages with silver “nylon” sheets that you open and use to cover yourself. There were also toilets with a small wall where you have to “relieve yourself” like that, in front of everyone, because there is no door, there is nothing, we placed the trash can in front of it. to have some privacy. And it was just to relieve you: there was nowhere to bathe or brush your teeth, you were only given wipes. What I did to brush my teeth was rinse my mouth out with plenty of water, because it felt bitter, like someone chewing ake.

They gave us to eat a chicken sandwich, energy tablets, an apple and some hot juices that no one could drink. At noon, what they gave was a cold, frozen taco, which they took out of the fridge. A few cold ham tacos which I think were the best despite being cold, and again the apple, energy bar and small bowl of apple juice. And in the evening they gave us a spicy burger again, so much so that nobody wanted to eat it, and the same things that I told you before.

There we glued ourselves to a glass to see outside because we were all very desperate, the hours did not pass. And when we knocked for someone to come because there was no more toilet paper or something like that, we asked what time it was. In general, they barely cared about us. There were girls hitting and saying “I have a headache”, “I feel bad”. I even saw a girl from Argentina, her name was Martina, she was only 19, she hadn’t eaten for days, she didn’t want to eat, and everyone started knocking, because the girl was sick, and we started to worry. Then an officer, nicknamed Martínez, arrived and said, “stop bothering you”, and he closed the door in our face in such a way that he almost caught the finger of one of the girls with these doors in metal, and he would have ripped it off and nothing.… We were trying to explain to him that the Argentinian girl was not well, but he told us not to talk to him, that there was nothing wrong with she. He didn’t open it for us until luckily it was lunch time and when he opened it the girl was no longer passed out but was still lying on the floor. So he told us to get out, not help her, that she had nothing wrong with her, but when we came back from lunch the girl wasn’t there. Afterwards, in the afternoon, we saw her again and she told us that they had left her there for a while and had given her a pill, nothing more.

Nothing happened over the weekend, but on Monday afternoon they asked me about the piece of paper they gave me to write the name of my contact in the United States , his address and the relationship we had; and on Tuesday morning a blond officer took me out of the shelter and asked me if I was afraid to go back to Cuba, I said yes, and she asked me to sign documents on a small screen with an electronic pen, although I never saw what I was signing. And that’s it, I signed, imagine the uncertainty of not knowing what I was signing; I did not know English. Later, when they released me, I found out that with this form we signed the deportation, a process that everyone seems to go through.

The next day, ICE (US Immigration and Control Enforcement) agents arrived and made you sign several papers, such as the one that says you are going to leave under condition I-220A,1 that’s how I got out. They also give you a phone and ask you to take several pictures: front, side, top, bottom and center. Finally, they ask you to take a selfie-style profile picture, which is the last one sent and is the one you need to take on the day of the week you need to report by phone, in my case Thursday at ten o’clock in the morning. the morning. From the day ICE gave me the phone, all notifications and checks have gone through them, including dates to see the immigration judge.

And the same day they did the process, they released me. First they walk you in again, but with the phone in its little box. When they do that, you already know you’re leaving, because that same day they took us in one of those little trucks but sat more comfortably in a place that looked like a motel, a hotel, right there in California, in San Diego, I think. There they tested us for COVID-19[feminine] and, if you test negative, they get you vaccinated (Pfizer) and they give you the card for the second dose where you’re going to be staying. They ask you a series of questions, they write down several things, they put you in all-inclusive rooms, where even food is free, and if you want, they give you clothes, shoes, whatever you need to travel in case you have no clothes. Then they tell you that you need to notify your family so they can get your plane ticket, that you have about three to four days for your family member to get the ticket, and they will fly you to San Diego for free the airport or another one there, which I don’t remember, which were the two closest to this place.

And that’s my whole story. My relative, my husband’s brother, got my ticket the day I arrived at the hotel, they tested me for COVID-19, I got the Pfizer vaccine, and the next morning I checked out, because my ticket was for 11 am. I had to layover in Las Vegas, Dallas, and from Dallas I traveled to Miami airport, and to this day I am here.

I started working in a jewelry store, I work from nine to five in the afternoon, Monday to Saturday. And although I went through this whole process that I told you about when you entered the United States, you must make an appointment with an attorney to arrange your residency. And since it costs money, that’s why I’m working now to be able to pay for it, you know? Because it’s all paid for, regardless of the help from the government, which gives you a living, but you have to get money for a lawyer to start processing the asylum papers for you. I’m on it now.

Even if I still can’t do it now, once I have the papers, I can go to places to study, so that they see that, although we have university studies, we are interested in s ‘to improve. Child care is very well paid here, it’s super cool and it’s a nice thing, because these are children who have problems, and it’s nice to see that we are helping a child to grow. Then, who knows, I would like to explore the profession of paralegal.

Now I live with my husband’s family, which is like my family, and I thank God for having found this jewelry store: the owner trusted me, she already leaves me alone in the shop, I have not to get up early, and she wants to give an elevation.

And looking at the experience I had from afar, I can tell you that the “contact” I sought to make the trip “painted everything rosy”, but that is very far from reality: the buses we were traveling in were public, they never said we had to pay at checkpoints; in short, they never say how everything is. Among the “guides” there were “Nicas”, Venezuelans, Mexicans… The “crossing” was safe but, at the same time, everything was precarious and uncertain: housing in very poor condition; crowded transport, with almost loose railings and at impossible speeds through these hellish hills; and with people who never tell you where you’re going or how it’s going to be.

The migrants with whom I traveled were not the same, nor the “guides”, who change according to the connections between the countries. But the Cubans that I met in the countries that I crossed, I established very good relations with them. We helped each other a lot, we bought things to eat, toiletries, you know, and we shared them… I had the most empathy with them. We still call each other, we communicate in the United States because climbing mountains and crossing an entire desert unites people. And despite all that I have been through, the hard times and the agony, I can only tell you one thing: I will never go back to Cuba!

1 Form I-220A is the authorization to be at liberty in the United States, but under immigration supervision. Information available here.