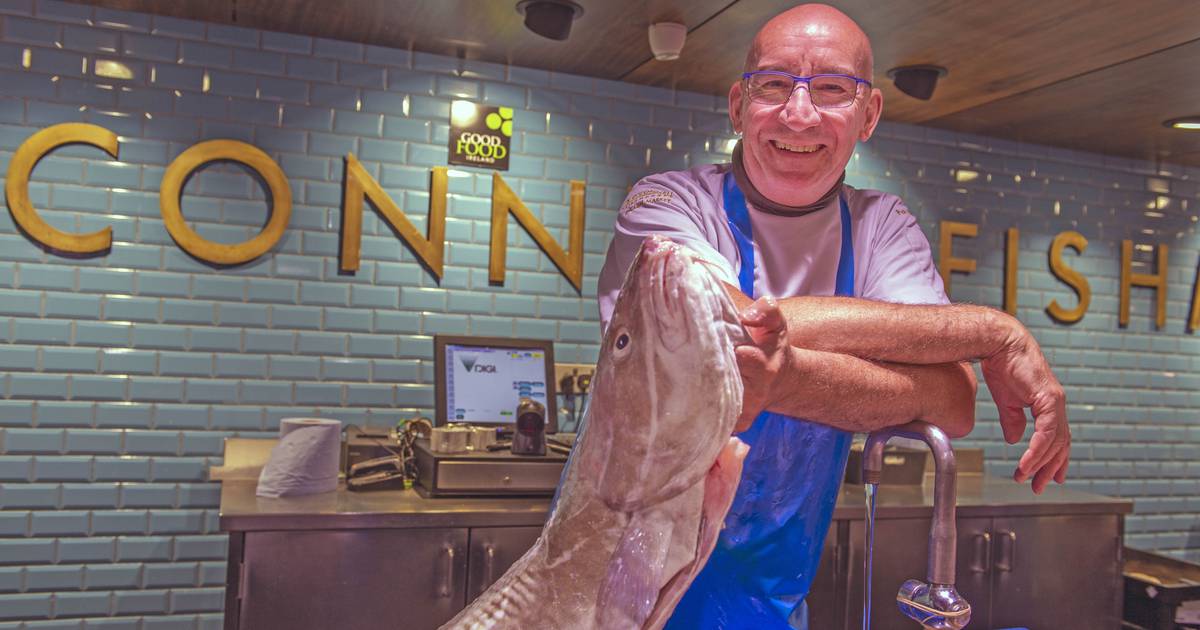 For fishmonger Pat O’Connell, it’s like losing a friend. The Corkman was busy serving customers at his stall in Princes Street English Market on Monday morning, but his mind was on the woman whose photograph descends from the wall behind him, alongside a collection of framed letters. ” I am a bit sad. I have very fond memories of her.

Clients have been coming all last week to tell him about Queen Elizabeth II, but there’s nothing unusual about that. “It’s been every day for 11 years,” he laughed.

He joked that his wife wouldn’t mind an epitaph for his tombstone. “She’ll just use the picture of me with the queen.”

After the Queen’s visit to the market in 2011 – when he joked that he was more nervous than he had been on his wedding day exactly 30 years earlier, prompting a roar of laughter who was filmed – he kept in touch with the British monarch, exchanging letters over the years. Their friendship culminated when he visited Buckingham Palace in 2014. ‘The last letter I received from her was two months ago,’ he said, shaking his head at the strangeness of everything. that. “The Queen and the Fishmonger – it’s weird.”

When 11 a.m. came, there was no room for a moment of silence at the crowded stall, where customers were already lining up for prawns or monkfish. Instead, he chose to focus on “the really happy memories of an amazing woman, who was nothing like what I expected, to be honest. I guess when you look at them from afar , you kind of think [of the institution as] elitist and it’s you know, a stiff upper lip and all that. And then you meet this woman and she’s down to earth because she comes with a fantastic sense of humor and then you’re invited back to Buckingham Palace. It’s not what I expected.

Her legacy is that she “put the English market and Cork on the map, and she did a great deal, which is far more important, for Anglo-Irish relations; 2011 was the kind of time people decided to look forward rather than backward, because we have a lot more in common than it separates us.

Merchant and artist, Paul Mulvany has a completely different memory of her. He rode what he still calls “the queen’s bicycle” in the English market on Monday.

He explained how, on the day of his visit to Cork in 2011, he rode another bike and left it locked to the Grand Parade bike rack. But when he returned that evening, the bike was gone. He discovered he had been abducted by the Queen’s security staff, who had decided “it was a bomb threat. They cut my bike in half with a grinder. He later got compensated for it and bought the bike he still uses to work at his Rave Cave t-shirt stand today.

Although he’s not exactly a royalist, he doesn’t hold a grudge. “If I was at home, would I watch it on TV? I don’t know what I think of it. I would probably watch it for the pageantry. You have to give it to them. They sure know how to put on a good show.

Nevertheless, he planned to observe a minute of silence at 11 a.m. “I would do that anyway as a mark of respect, whoever it was.”

Four years ago he was lucky enough to meet Prince Charles and Camilla, now King Charles III and Queen Consort. From the back of the shop, he retrieved the slogan baseball cap he’d put on for Charles’ visit. It reads, “Grumpy Old Man”. “Charles looked at me and said, ‘I know exactly how you feel.'”

He has a furtive sympathy for the new king. “It must be a terrible job, having to get up every morning and go out to meet and greet people.”

Everyone in the English market seems to have a story about the royal family.

From the back of her stall, Belvelly Smoke House owner Frank Hederman produces a photo of the Queen eating her smoked salmon at a lunch prepared for her by Irish chef Richard Corrigan in 2006. By the afterwards, he heard that the queen had declared the salmon “exceptionally good”. ”.

Thinking back to his visit, I became quite sad. I wouldn’t say a bad word about him at all, at all, other than good things. She was absolutely wonderful. His visit broke many barriers

He still blames himself for having forgotten to exhibit the photo during his visit in 2011 and for never having spoken to her. But he met Camilla in 2018. “She came straight up and said, ‘Frank honey, I hear your salmon is the best in the world.'”

At his nearby stand, Coughlan Meats, Paul Murphy has planned to observe a private moment of silence out of respect for the queen of his stand at 11 a.m. “I may personally just think and stand still for a minute.

“Thinking back to his visit, I became quite sad. I wouldn’t say a bad word about him at all, at all, other than good things. She was absolutely wonderful. His visit broke many barriers.

Murphy is the fourth generation of his family in the business and has been here for 64 years. Although he was unable to speak to the Queen herself during her visit, “I had a good chat with the Duke. I found him very nice. He was quite humorous.

He stopped himself. “It may not go well now, but I’ll tell you anyway.”

He remembered Prince Philip gazing admiringly at the bread stall opposite. “The bread stand was fantastic. I thought he was going to say, “Oh, what great bread.” But it turned out that his attention had been caught by something else. “’Oh,’ he said, ‘what pretty girls.’ True to its name.

Not all of his clients felt so fond of the British Royal Family on Monday morning. He recounted a conversation he had with his longtime regulars earlier. “I said to him, ‘They’re taking Lizzie down today.’ She says, ‘About time. I’m sick of watching it on TV.'”

Venice Bvudzijena, at the market for shopping with her son, Rain, 18 months, was rushing home to see the funeral on television. She was both perplexed and moved by the force of reaction in Britain. “It’s amazing how many people were paying their respects and lining up in the street and everything.”

She is from Zimbabwe and the answer seemed strange but moving to her. “I’m a foreigner, so it was interesting to see what people think of the kingdom and all that. It was good to see how people liked him and everything.

Yet others were firmly immune to the nostalgia and pageantry of the times. A merchant shook her head firmly and turned away when approached for a comment.

“She’s been dead for 11 days,” another man said impatiently at another booth when asked about the queen’s death. He was here when he visited in 2011 and met her, but has nothing more to add about her. “What do you want me to say?”

Are you tired of talking about it? “Totally.”