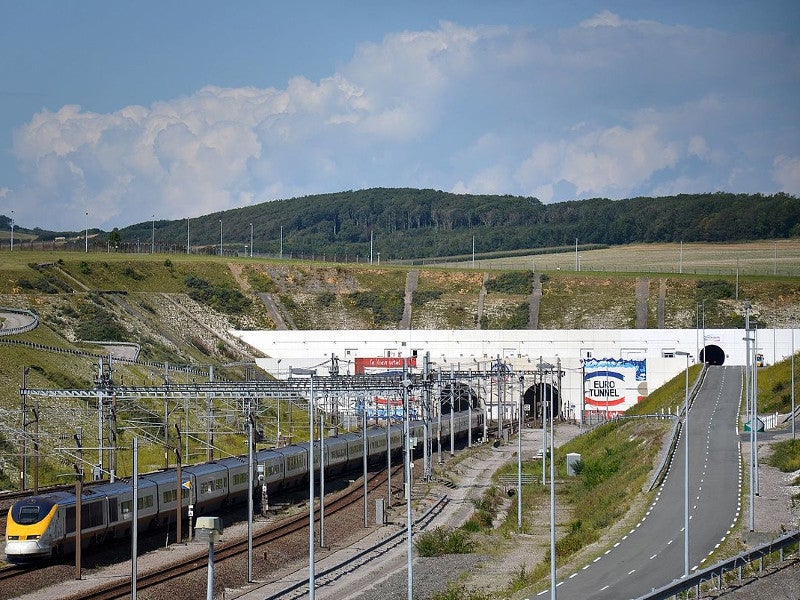 The Channel Tunnel or Chunnel is a 50 km long undersea railway tunnel under the Strait of Dover in the English Channel.

It is one of the longest underwater tunnels in the world and connects Folkestone in Kent, UK, to Coquelles in Pas-de-Calais, France. The average depth of the tunnel is 40 m.

Construction of the tunnel began in 1986 and was completed in 1994. The project received an investment of £14.7 billion. Around 500 trains pass through the tunnel each day with a crossing time of 35 minutes.

Deutsche Bahn was supposed to run its high-speed Intercity-Express (ICE) trains through the tunnel. The German company received approval from the Intergovernmental Channel Tunnel Commission in July 2013. The operator subsequently canceled plans to introduce the service.

“In 2018, Eurostar carried 11 million passengers through the tunnel.”

The construction of a tunnel linking the UK and France was first proposed in 1802. The project did not proceed due to the lack of proper tunneling techniques. In 1955, both countries recognized the demand for the tunnel.

In 1957 the Channel Tunnel Study Group was set up to research the possibility of building a tunnel link.

Studies by the group revealed that tunneling could be achieved through the lower chalk layer, a geological sediment formed millions of years ago. The layer is less likely to fracture and collapse and contains clay which prevents groundwater penetration.

The project was officially launched in 1973 but abandoned in 1975 due to the fuel crisis. It was revived in 1984 and tenders were issued for the construction of Chunnel.

A concession agreement was signed with Groupe Tunnel sous la Manche and France-Manche for 55 years in 1986. In the same year, Groupe Eurotunnel was created to carry out the project.

The contract for engineering, construction, procurement and project management services has been awarded to Bechtel. A consortium called TransManche Link (TML) won the construction contract.

A total of 11 tunnel boring machines, each weighing approximately 450 t, were used to dig the tunnels. After the official inauguration in May 1994, the first commercial services through the tunnel began in June 1994.

The Dover Strait Tunnel consists of two rail tunnels and a service tunnel, each 50 km long. The two railway tunnels have a diameter of 7.6 m and are 30 m apart.

The service tunnel, with a diameter of 4.8 m, is located between the two railway tunnels and 15 m away from each tunnel. The multifunctional service tunnel is used in an emergency and allows personnel to quickly reach the scene of an accident.

An underwater crossing is also planned in each tunnel, allowing the passage of trains from one tunnel to another during maintenance operations.

Electricity is supplied to the trains, tunnels, lighting and drainage pumps by two 160 MW substations on either side of the tunnel. If one substation fails, the other can supply power to the entire system. The tunnel’s high, medium and low voltage power needs are covered by 175 secondary substations.

Two terminals, at Coquelles and Folkestone, link the rail system to other road and rail networks.

Each electric locomotive is 800 m long and has three powered two-axle bogies. Each shuttle circulating in the tunnel is equipped with two locomotives on each side to make the journey in the event of a breakdown of one of the locomotives.

The stainless steel passenger shuttles consist of two parts, one for transporting vehicles over 1.85m such as coaches and caravans on a single deck, and the other for transporting cars and motorcycles on a double bridge. Each shuttle has 24 wagons and four loading/unloading wagons. The shuttles were built by Bombardier, BN and ANF.

Six Breda-Fiat type shuttles and nine Arbel type make up the tunnel truck shuttles. Each shuttle has two locomotives and three loading/unloading wagons. The units also have 30 wagons and each of them can carry a 44 t truck.

The service locomotives include 24 rubber-tyred vehicles, which run on cast-in-place concrete. They can move up to a speed of 80km/h and are electronically guided by an on-board cable. Service locomotives carry out maintenance operations.

The entire transport system in the Channel Tunnel is automated and controlled from two Rail Control Centers (RCCs) located at each terminal to manage rail traffic. Controllers are also installed in the system for manual control in the event of a technical failure.

“It is one of the longest underwater tunnels in the world and connects Folkestone in Kent, UK, to Coquelles in Pas-de-Calais, France.”

A signaling system called TVM 430 is used in the tunnel to transmit track data to the train. Locomotive drivers receive instructions and data along the track and through indicator lights in the cab.

In December 2009, Alcatel-Lucent won a contract to modernize the communication infrastructure in the tunnel. As part of the €21.5 million project, Alcatel-Lucent installed its GSM-R solution in the tunnel in time for the 2012 Olympics. The system is helping to improve the safety of the Channel Tunnel and the effectiveness of communications between RCC and a train driver.

Mobile telephony and Internet services were launched inside the tunnel in July 2012. Alcatel-Lucent worked in collaboration with French telecommunications operators Orange, SFR and Bouygues Telecomi to provide the services.

Bombardier OMNEO is a new double-decker electric train, which was unveiled in September 2013 by the SCNF. The train is marketed as Regio 2N in France.

Shenyang’s tram system was opened to the public in August 2013 during the 12th Chinese National Games.

Topics in this article:

2013-11-24
Next Post: The Royal Navy tracks seven Russian warships across the English Channel