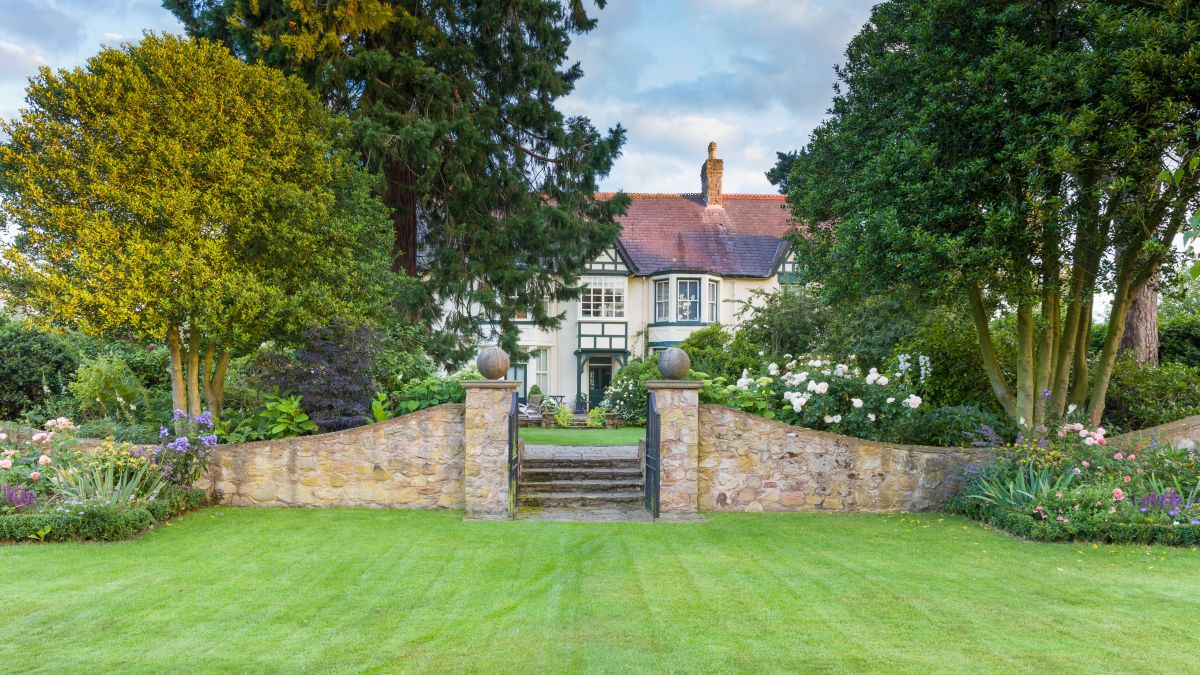 A classic English garden with white and colored areas

Bryn Bellan’s beautiful garden is a two-part story and perfectly complements the late Georgian house that surrounds it, which was extended in Victorian times.

The garden is spread over two levels – the upper area is more formal, with elegant white-themed flower borders, while the lower area is full of colorful flowers in the cutting garden and flowerbeds.

Now showcasing many classic English garden ideas, the land was overgrown and neglected when the owners took it over, but over the course of around 20 years they gradually transformed a ‘jungle’ into the tranquil and picturesque vision that it is. is today.

“The garden wasn’t a blank canvas: it was wilderness on two levels connected by a slope,” says owner Gabrielle Armstrong, who orchestrated the redesign using sloped garden ideas, supported by her husband. Trevor Ruddle.

The remains of a carriage roundabout now form a semi-circular sunken lawn in front of the house, on which a majestic Sequoiadendron giganteum – commonly known as Wellingtonia – casts its beautiful shadows.

Before redesigning the garden, Gabrielle took the time to observe things, like the position of the sun at certain times of the day.

“The sequoiadendron is about 150 years old and I noticed how it cast the most amazing light and shade on the lawn at any time of the day,” she says.

She needed to include shrubs for shade as much of the sun from her part of the garden is washed away by the trees, which meant she couldn’t include a lot of perennials.

Gabrielle’s solution to bring some order to the garden, and make the two levels easier to negotiate, was to tame the slope with a flight of steps flanked by a pair of pillars, and to build a new curved garden wall to create two spaces.

Elegance and formality lie at the heart of the upper garden, with its semi-circular lawn encircled by an idea of ​​a rope-lined gravel garden path and framed by borders planted with structural evergreen shrubs and topiaries for a beautiful appearance all year round.

Flowering shrubs and perennials are chosen for their soothing variegated foliage and white flowers.

The narrow patio at the rear of the property has been widened to provide the perfect place to entertain friends, using carefully selected Jacobean brickwork to blend in seamlessly with the original section. A semi-circular tea terrace has been created to catch the afternoon and early evening sun.

‘This part of the garden has been designed with structure and form and with a green and white garden color scheme. It enhances and fits comfortably into the style of the house,” says Gabrielle.

The walkway between the two gardens is positioned to create a beautiful view over a lawn, punctuated by specimens of fast-growing trees.

These include a large weeping silver birch underplanted with an oval bed of naturalized spring bulbs, beginning with snowdrops and crocuses and continuing with narcissus and camassia, which look iridescent in the spring sunshine.

In the contrasting lower garden area, two matching curved flowerbed ideas framed by low boxwood hedges are positioned close to the wall, planted with roses and perennials in hues of purple, lilac, coral and apricot.

Tucked away to the far right is a romantic cut flower garden surrounded by a trellis fence, originally set up to deter a Jack Russell terrier, but now proving useful to keep rabbits away and add an ornamental note.

Here, Gabrielle grows a succession of flowers over a long season in colors that complement the decor of different rooms in the house, including fragrant flower choices.

Along the path through this garden are four types of allium, whose ethereal seed heads look great even after the petals have faded, and ‘Jane Phillips’ irises with their vibrant blue flowers and star-shaped leaves. ‘sword.

“While I love structure in a garden, I love country garden plants,” says Gabrielle.

“My mum had a cutting garden and I wanted one too, but it’s more of a country garden so it’s breathtakingly beautiful all season long.”

Sweetly scented ‘Hidcote’ lavender is planted at the base of the trellis fence to soften its edges all year round and bring a bright blue haze to this part of the garden at the height of summer.

Its color complements that of the jewel shed idea, next to which is an old French bottle dryer used to store terracotta pots, creating an attractive and practical feature.

The cutting garden can be enjoyed from a circular seat surrounding an old apple tree, beyond which is an enclosed opening through a beech arch to a composting area.

This area sits on the edge of a wildflower meadow, through which winding rides are cut during the summer months to blend the garden with the countryside beyond.

The garden continues to evolve from season to season, as a perfect example of how to plan a garden of distinct areas and styles.